Prussia - important cigarette case given from Prince Adalbert of Prussia 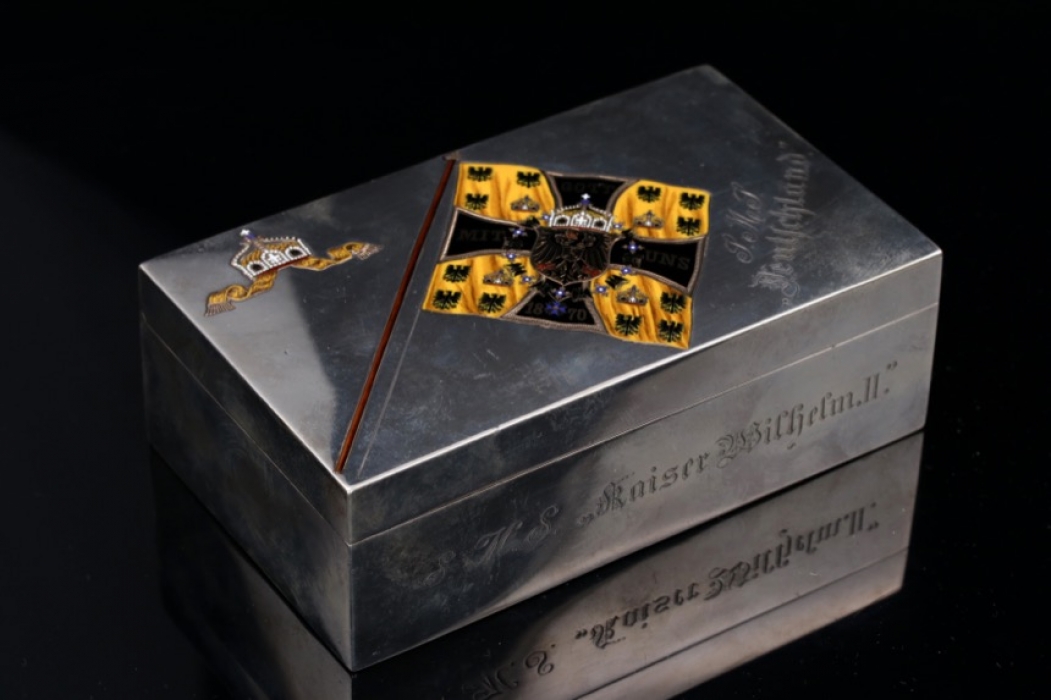 Prussia - important cigarette case given from Prince Adalbert of Prussia

Impressively designed silver cassette for storing cigarettes as a gift from the German Imperial House from the time of the monarchy. Prince Adalbert of Prussia gifted this cassette in 1943 to his godchild, the third son of Kaiser Wilhelm II and Empress Auguste Victoria. Formerly owned by the emperor.

It is significantly larger than the extremely rare found gift boxes with maritime reference from the time, with measurements of 14.5 cm by 8.5 cm by 5 cm. The lid features in the middle the imperial standard; a multi-coloured, partly translucide, enamelled and chiselled on a gold base placed almost seamlessly into the silver. The flagpole is worked in the same manner, with the Prussian royal crown placed on top. The imperial crown of the German Empire, made in equally fine gold and enamel work is placed in the upper left corner of the lid. "S.M.S. Deutschland." Is engraved next to the standard on the right, "S.M.S. Kaiser Wilhelm II." on the edge of the lid to the front. The bottom shows the supplier’s mark engraved as: "H. Hirschwald Berlin.", followed by silver hallmark half moon/crown and silver content mark "875". The bottom also features the engraving: "Zum 12.II.43 Patenonkel Adalbert", unambiguously depicting the prince's signature. The cassette is lined inside with reddish wood (cherry?), three wood spacers have been lost. The lid and bottom are connected by a hinge that runs along the entire width. Inside information with indications of the origin in English. Gold, silver and enamel work undamaged in excellent condition, age-appropriate patina.

The pedigree of the cassette linked to Prince Adalbert can be unambiguously proven from the engraving to the bottom: Apparently, this piece of jewelry was in the possession of the well-known Prussian prince at the time of the Second World War. He lived rather secluded after the events of the World War and had moved to Switzerland since 1928. He gave the cassette, which can hardly be surpassed in terms of craftsmanship, to his godchild in 1943.

It is striking that the cassette does not have an original dedication, unlike many other silver objects from this time. Comparable treasures have been awarded to high-ranking personalities with corresponding dedications from a wide variety of occasions such as promotions, transfers, assumptions of command etc. However, the external design does not reveal corresponding clues, although such dedication would have been almost inevitable. However, the elaborate decorations of the cassette as well as the applied engravings of the ship names "S.M.S. Kaiser Wilhelm II." and S.M.S. Deutschland." must give the starting point for clarifying the origin and the later path of the cassette. Due to the representation of the imperial standard next to the German imperial crown, it can be assumed with high certainty that the cassette must have been originally owned by Kaiser Wilhelm II or was part of one of "his" ships (The imperial standard was hoisted on the top of the large mast and all other command and distinguishing signs were deleted as soon as the emperor boarded a ship). Looking at the engravings of the ship's names, it is striking that they are executed in slightly different fonts. This indicates that the ship's name of the "Deutschland" was later added to the lid on the right. Therefor the cassette had originally been procured with reference to the "Kaiser Wilhelm II.". The linkage to a high-ranking officer, including Prince Adalbert, in command of one of the ships cannot be proven. However, one common denominator stands out: both ships were flagships of the Imperial Navy ("Kaiser Wilhelm II." from February 1900 to September 1906, when the ship was replaced by the "Deutschland"). Here lies an obvious connection between the two ships. Whether the emperor wanted the cassette to be kept on board of the respective flagship or whether it was given away can no longer be determined with certainty. Unfortunately, the note in English offers little information on the topic.

Due to the precision of the execution of the goldsmith and enamel work, which can hardly be surpassed in its precision, this piece must be regarded as one of the real rarities in the field of silver/gold production with reference to the ruling house and receives its special charm through the connection to the war fleet, which is very dear to the emperor's heart. The cassette represents the vigor and the means in which Wilhelm II. pushed the expansion of the German Imperial Navy forward.

A gem for any high-quality naval collection of historical significance. A unique item.


Condition
1
Click here to visit our shop! New arrivals on a regular basis! 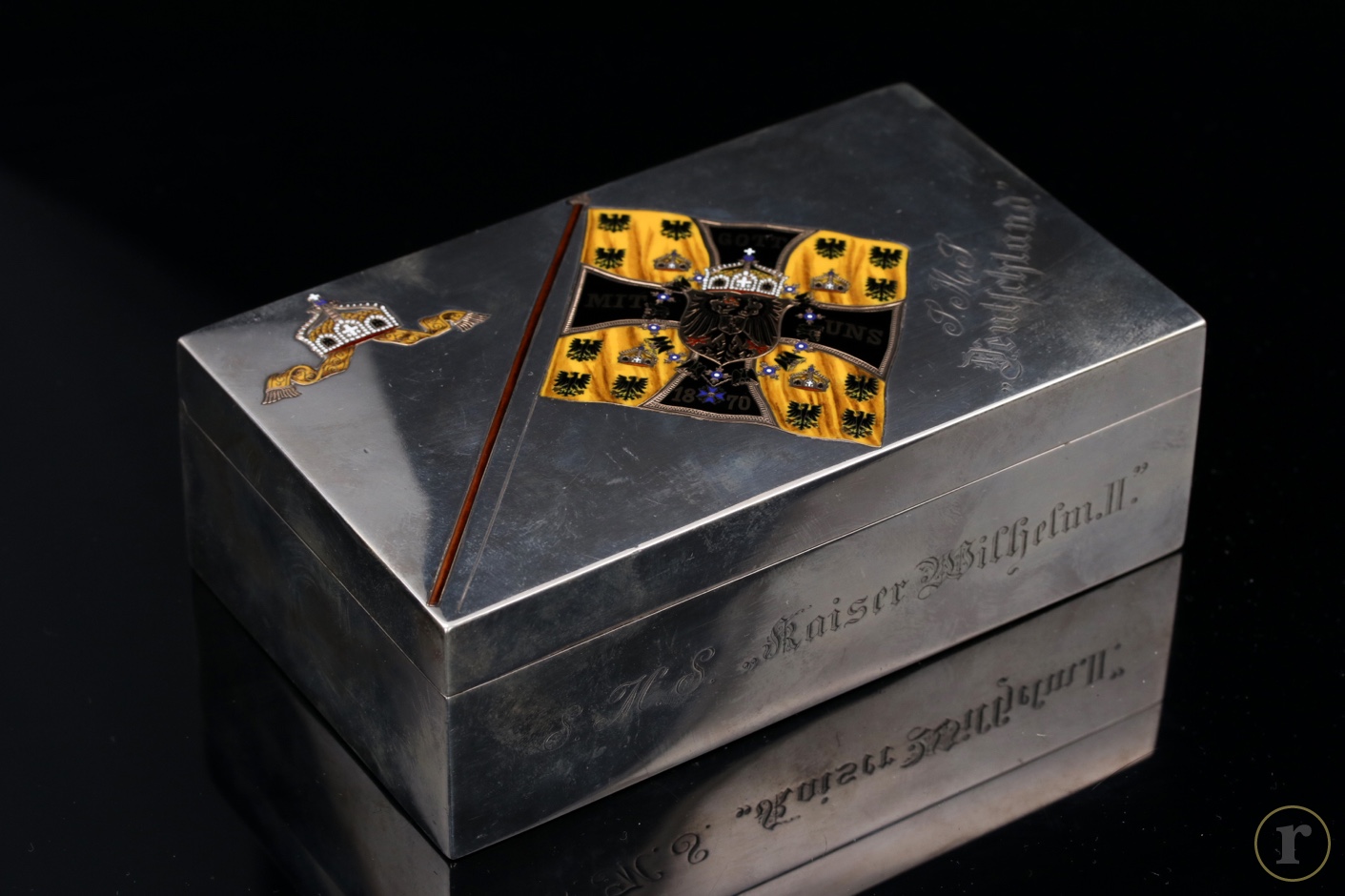 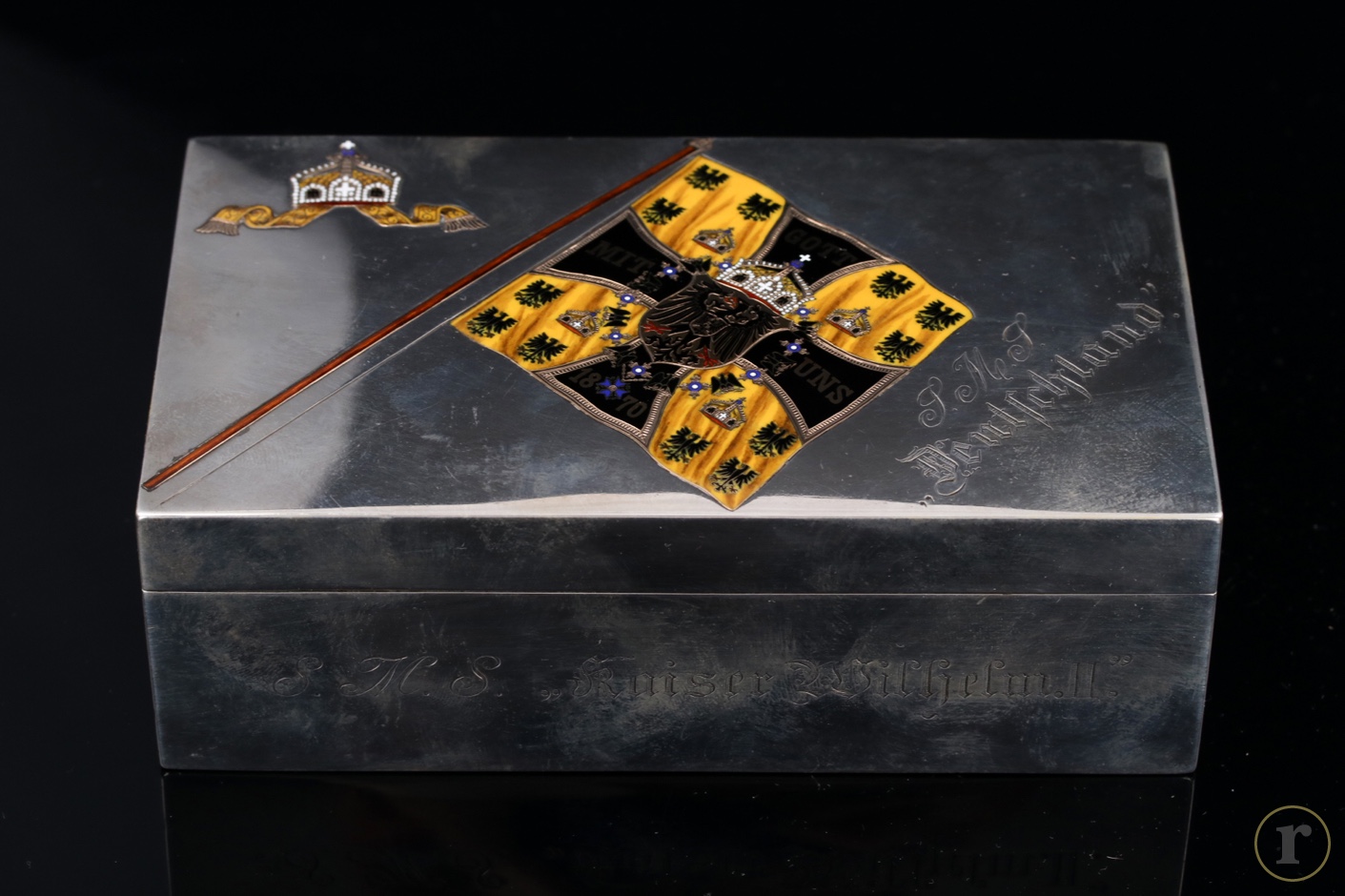 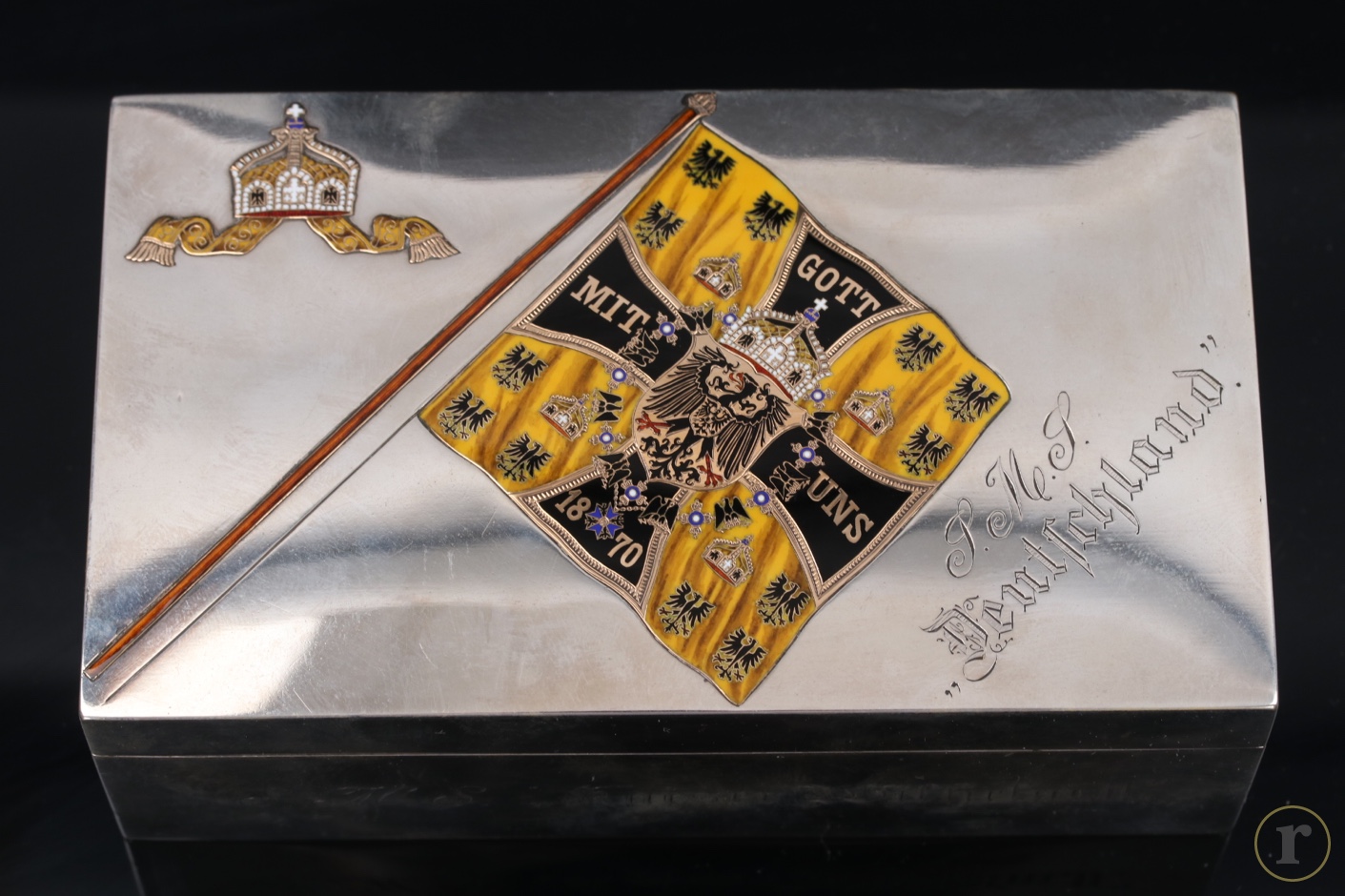 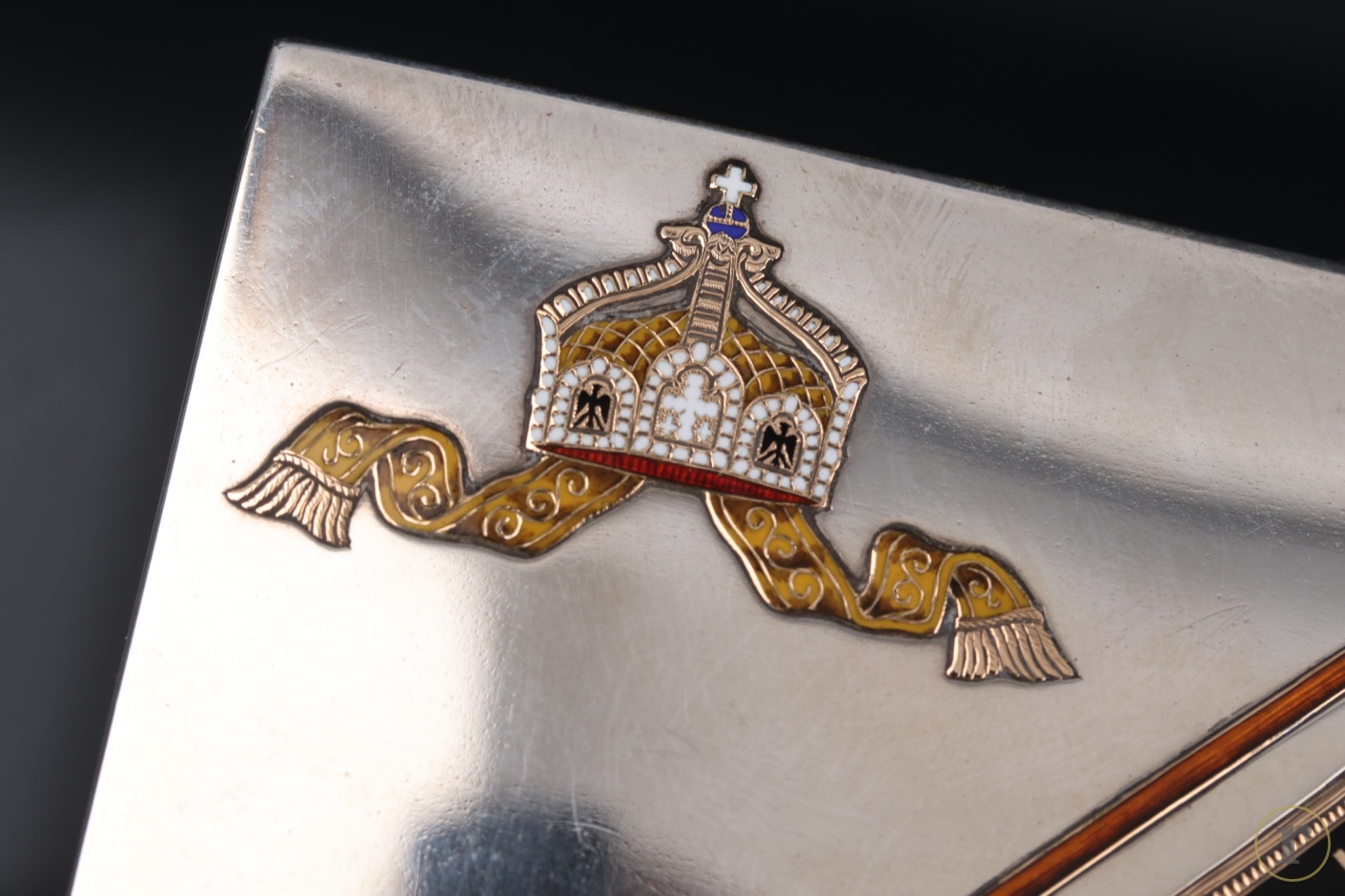 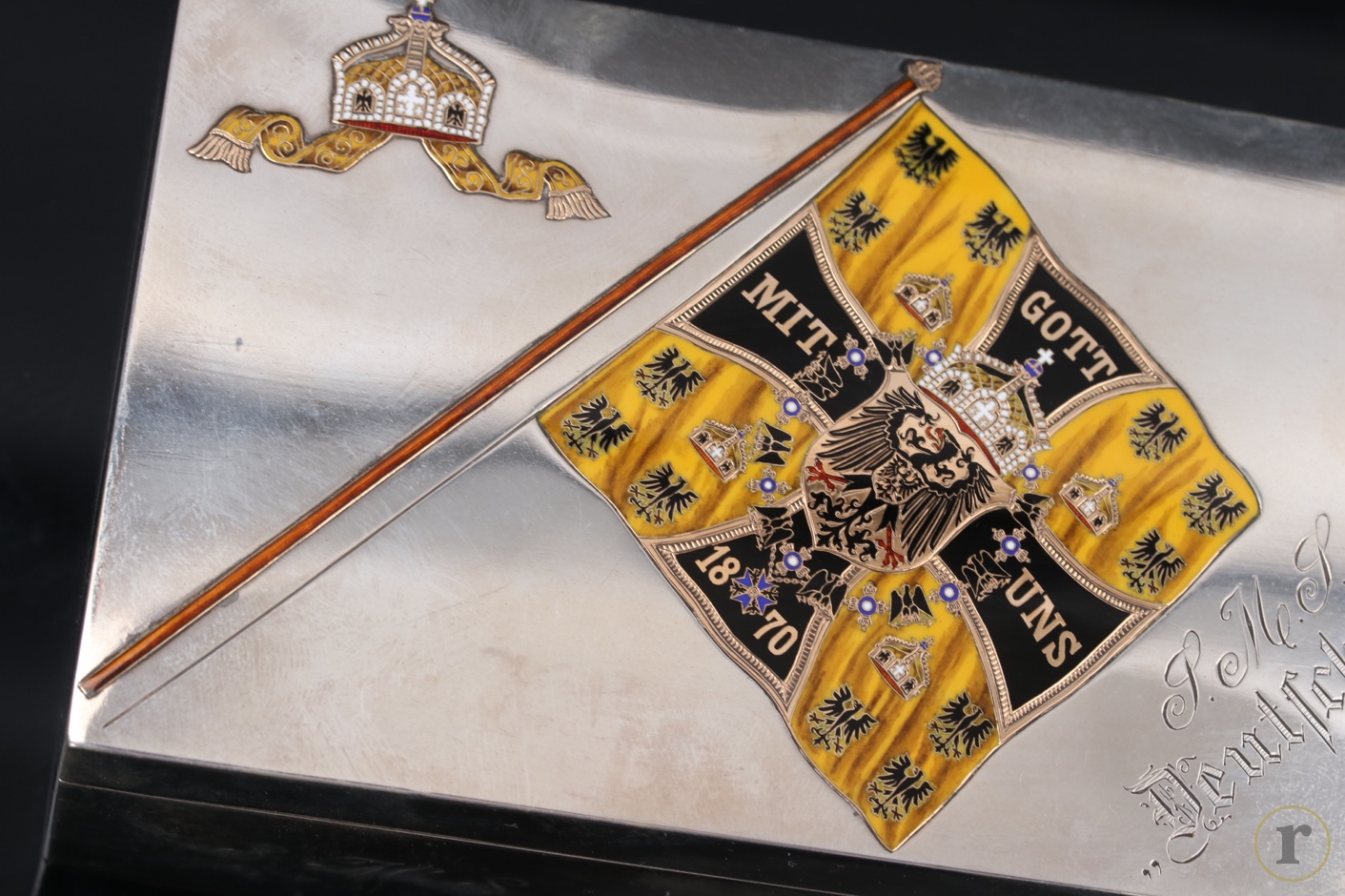 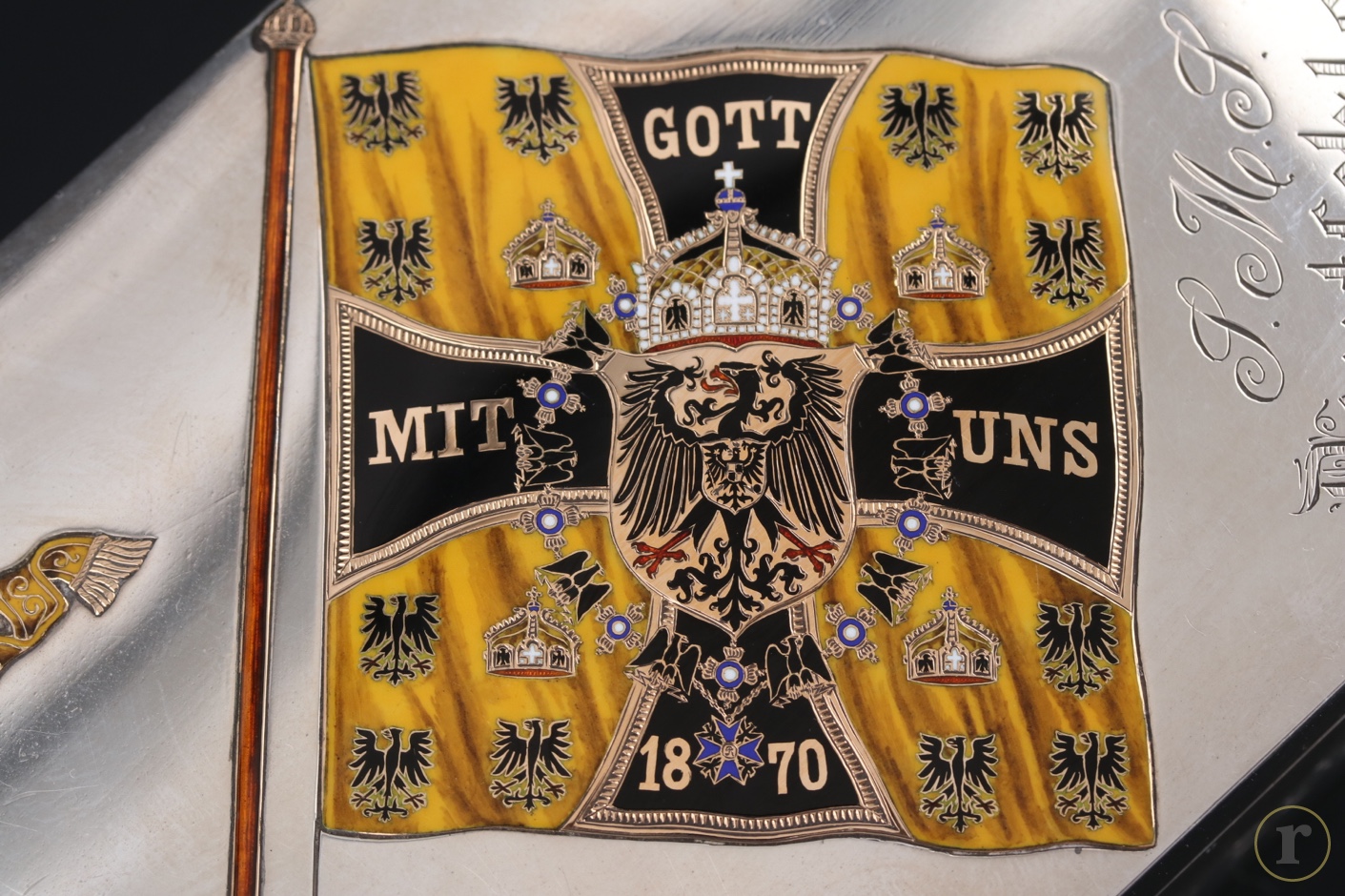 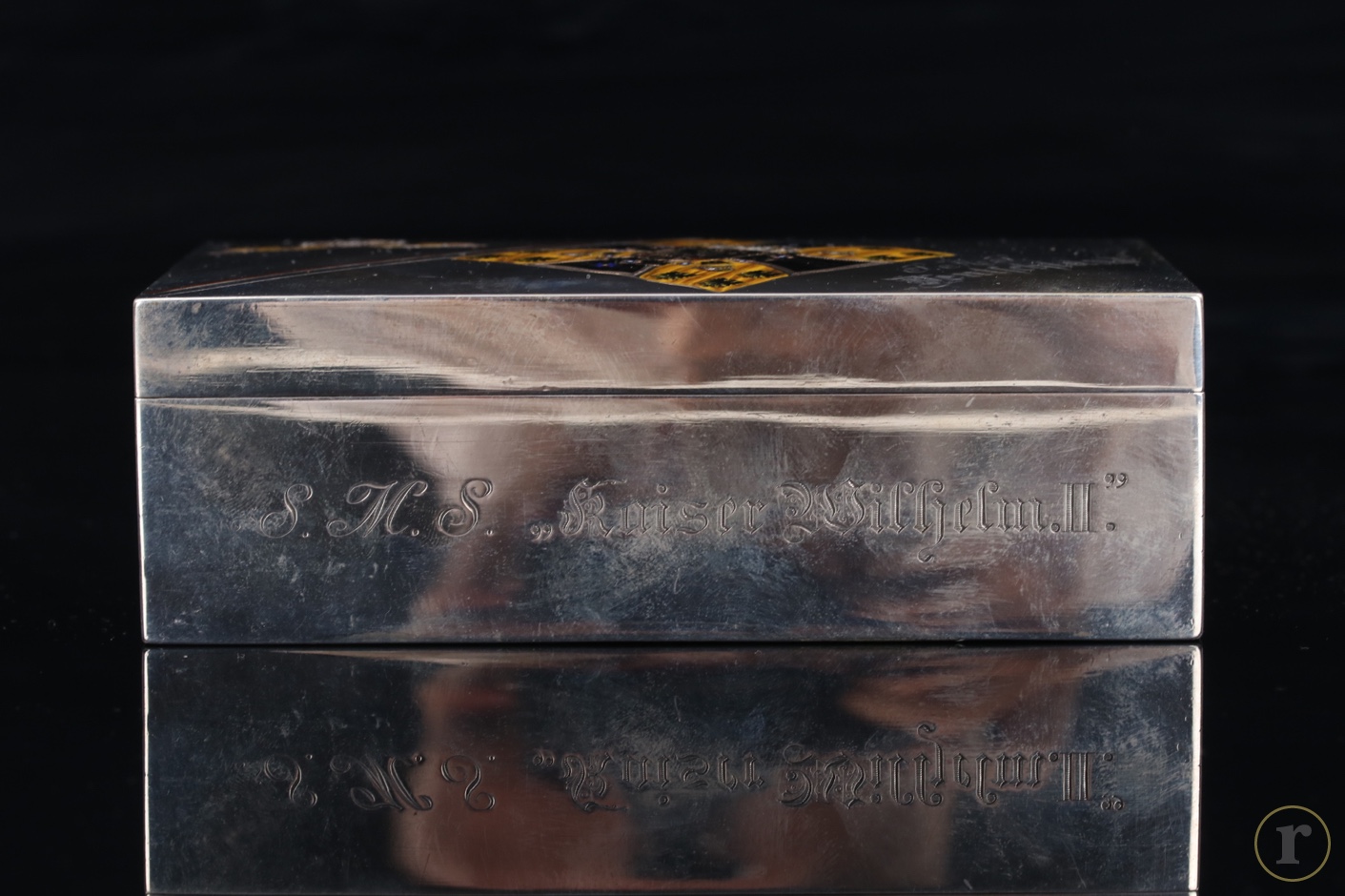 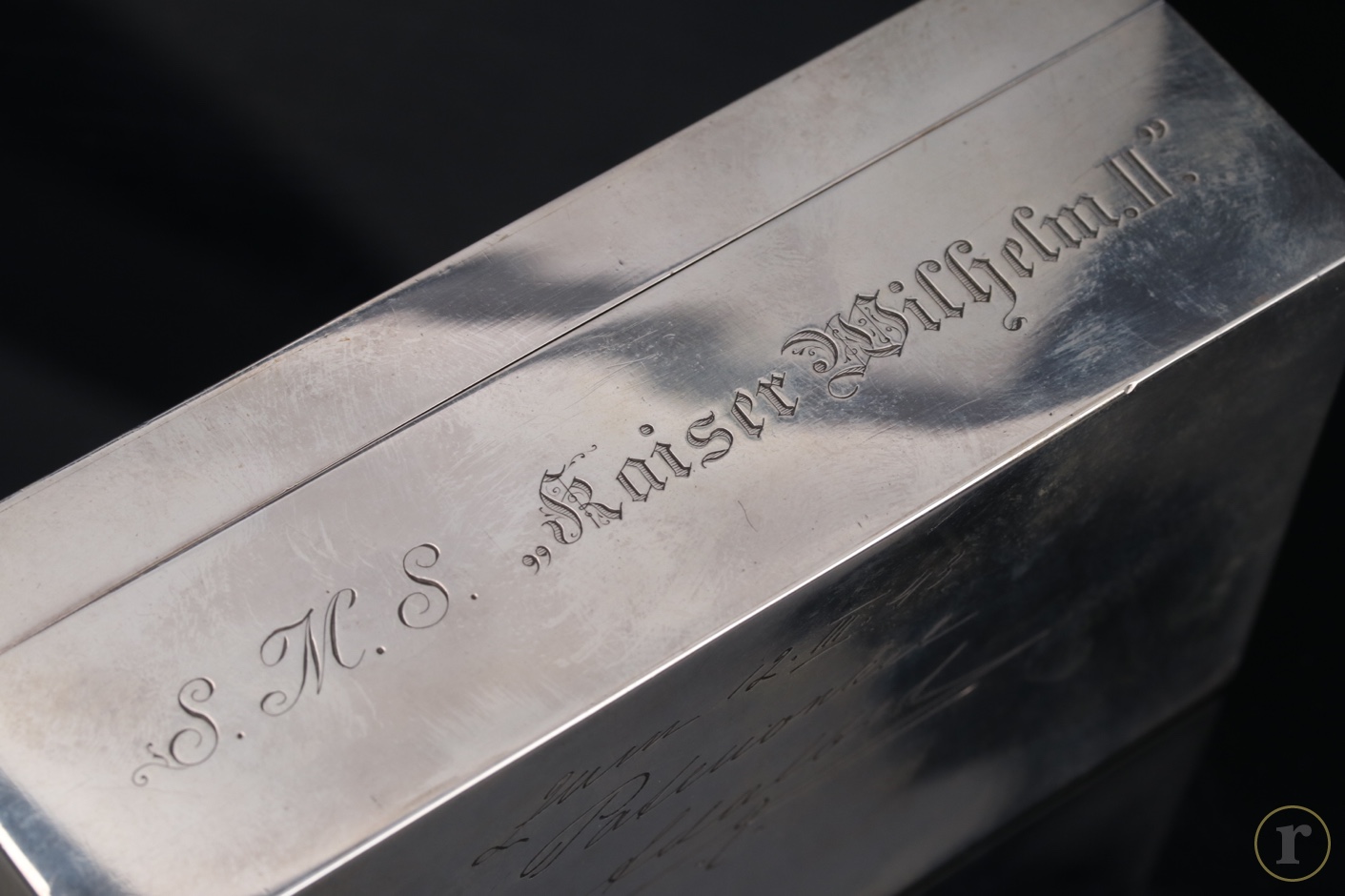 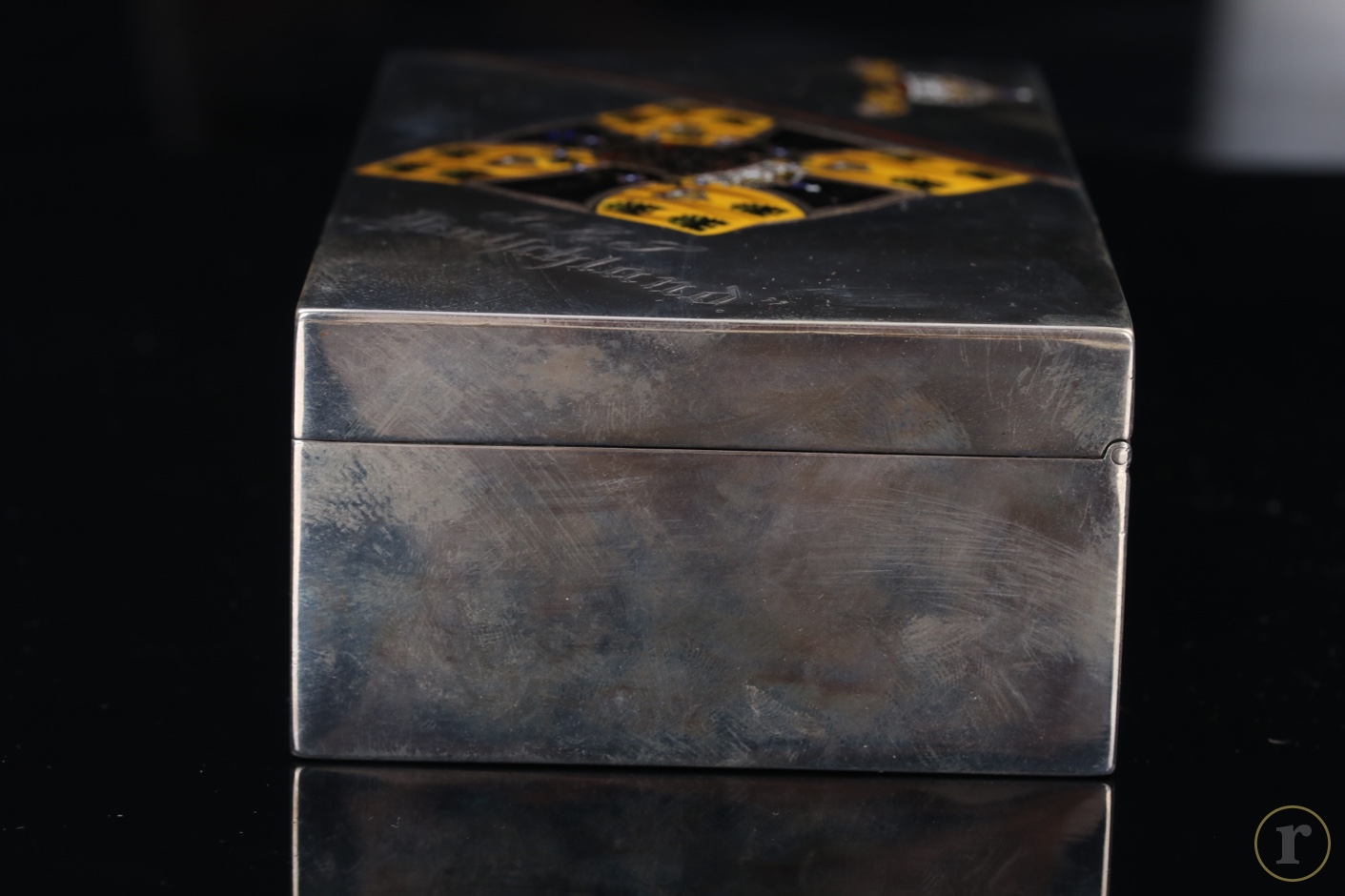 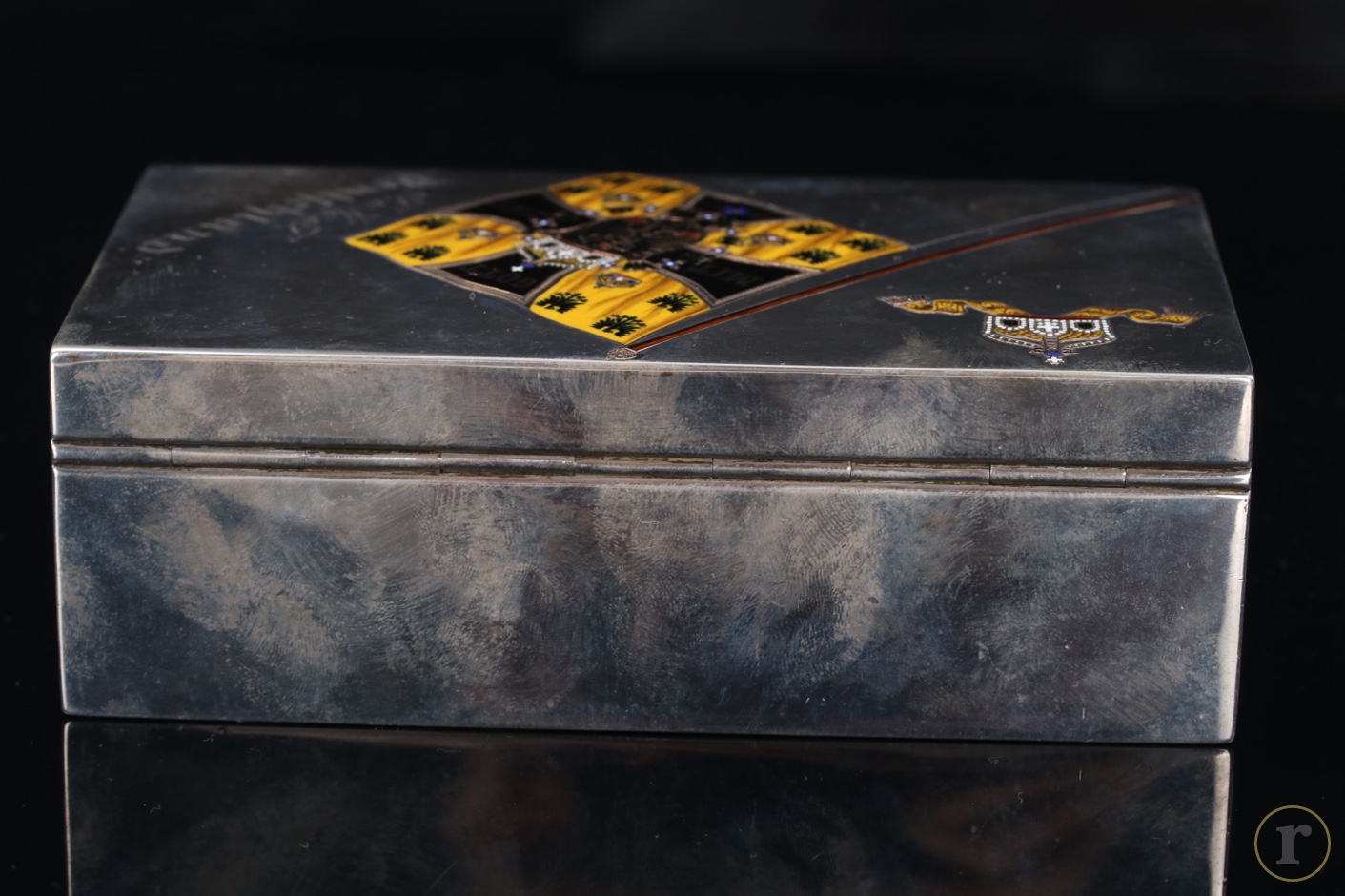 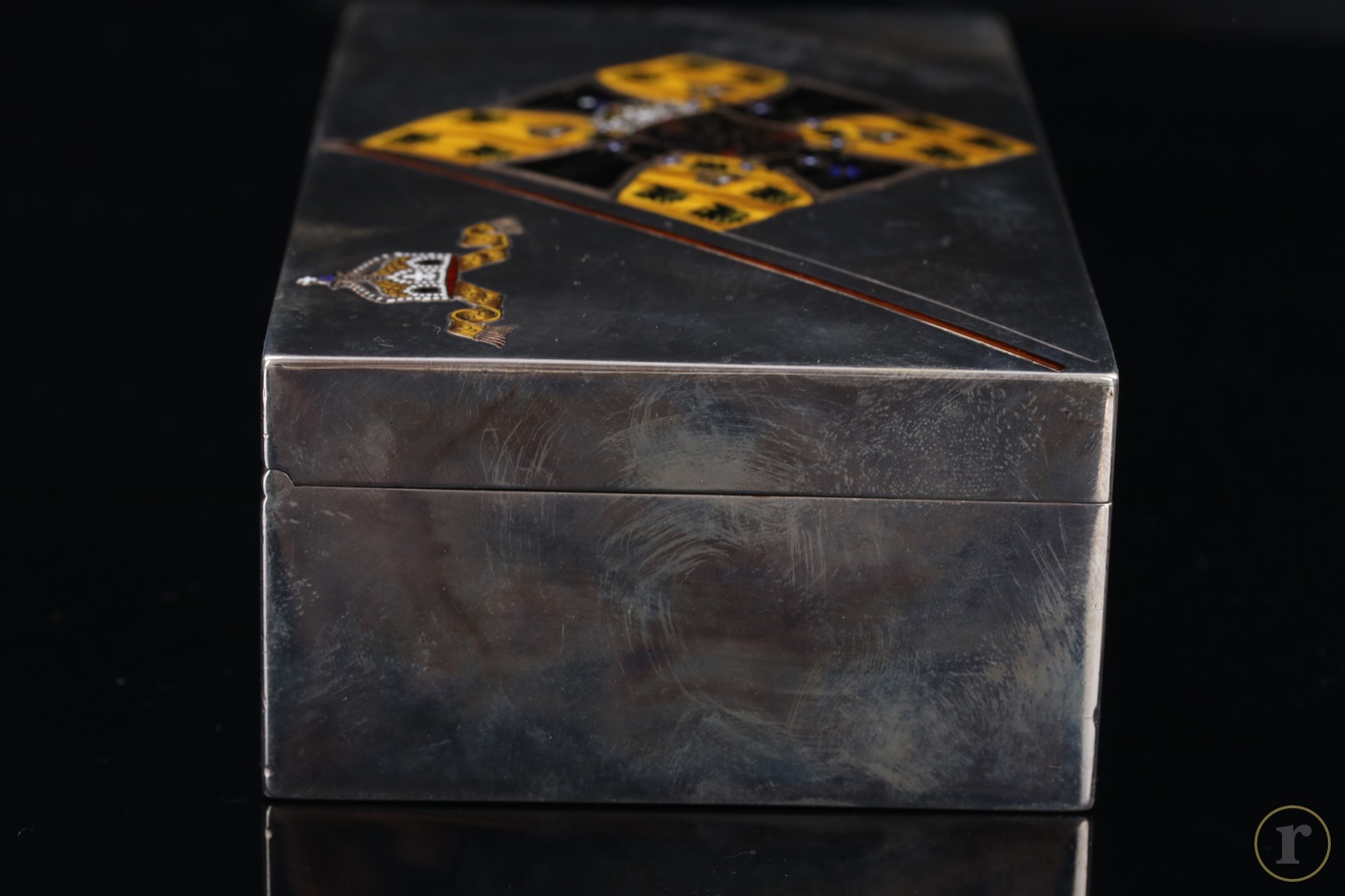 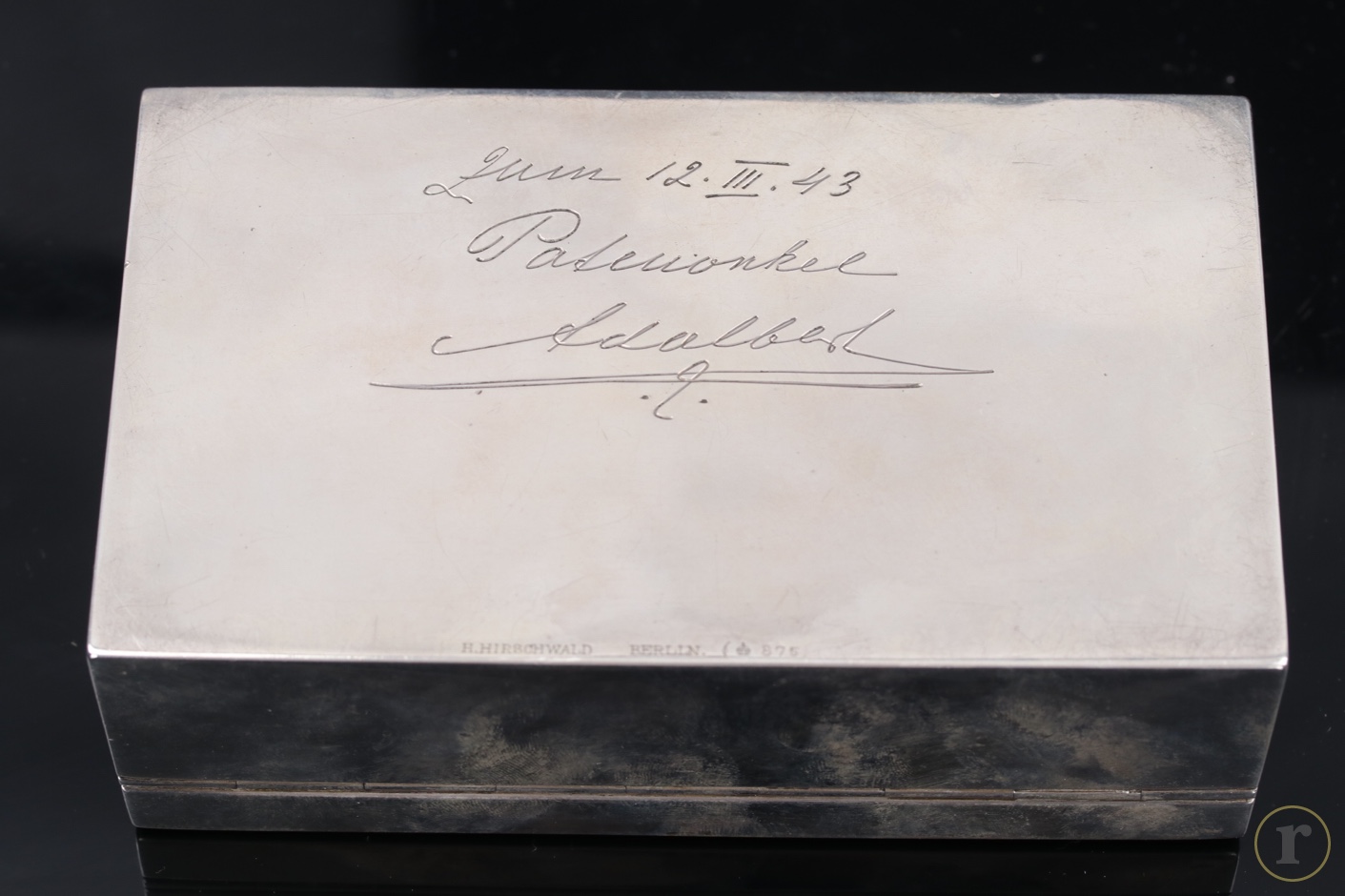 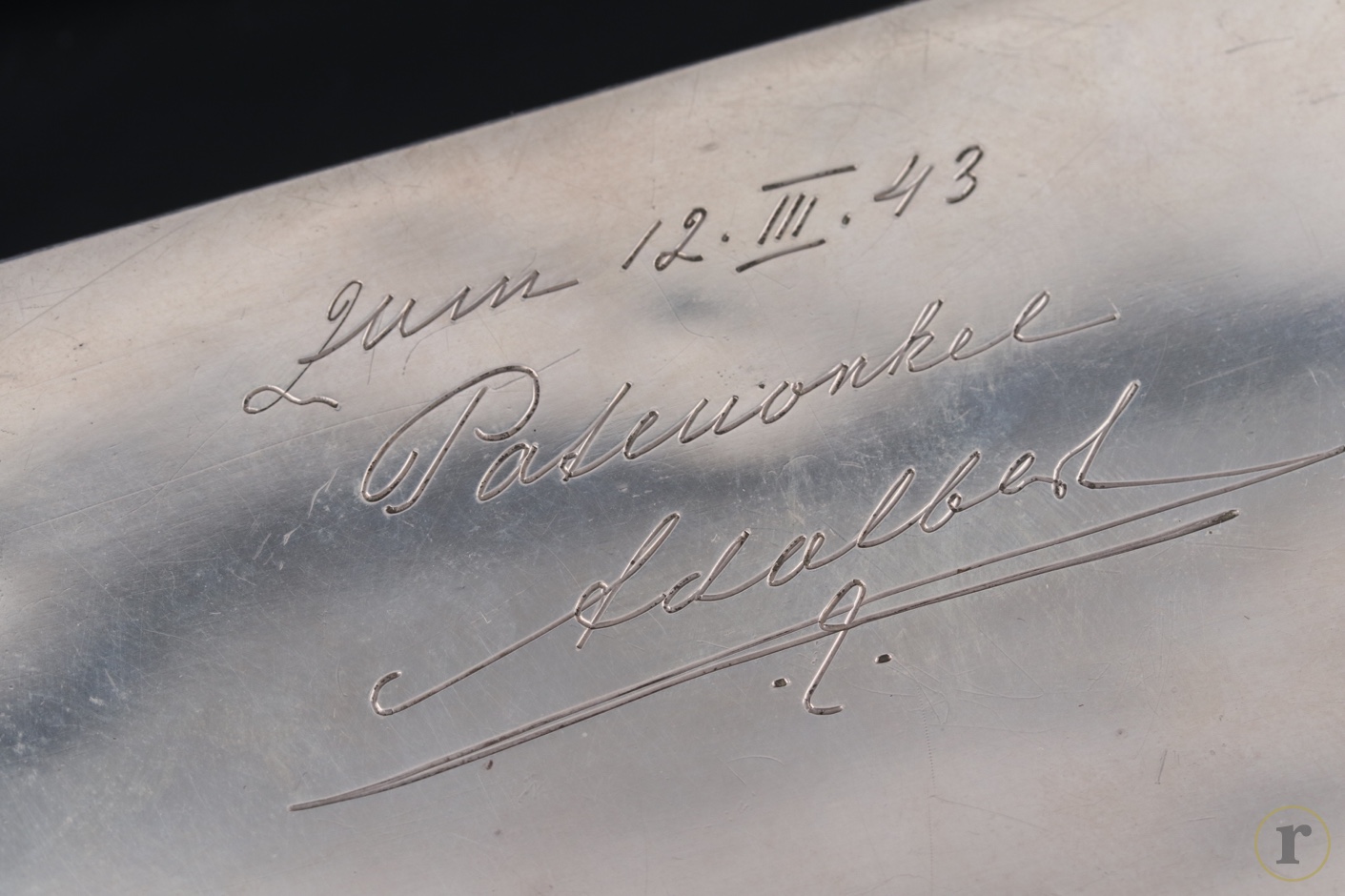 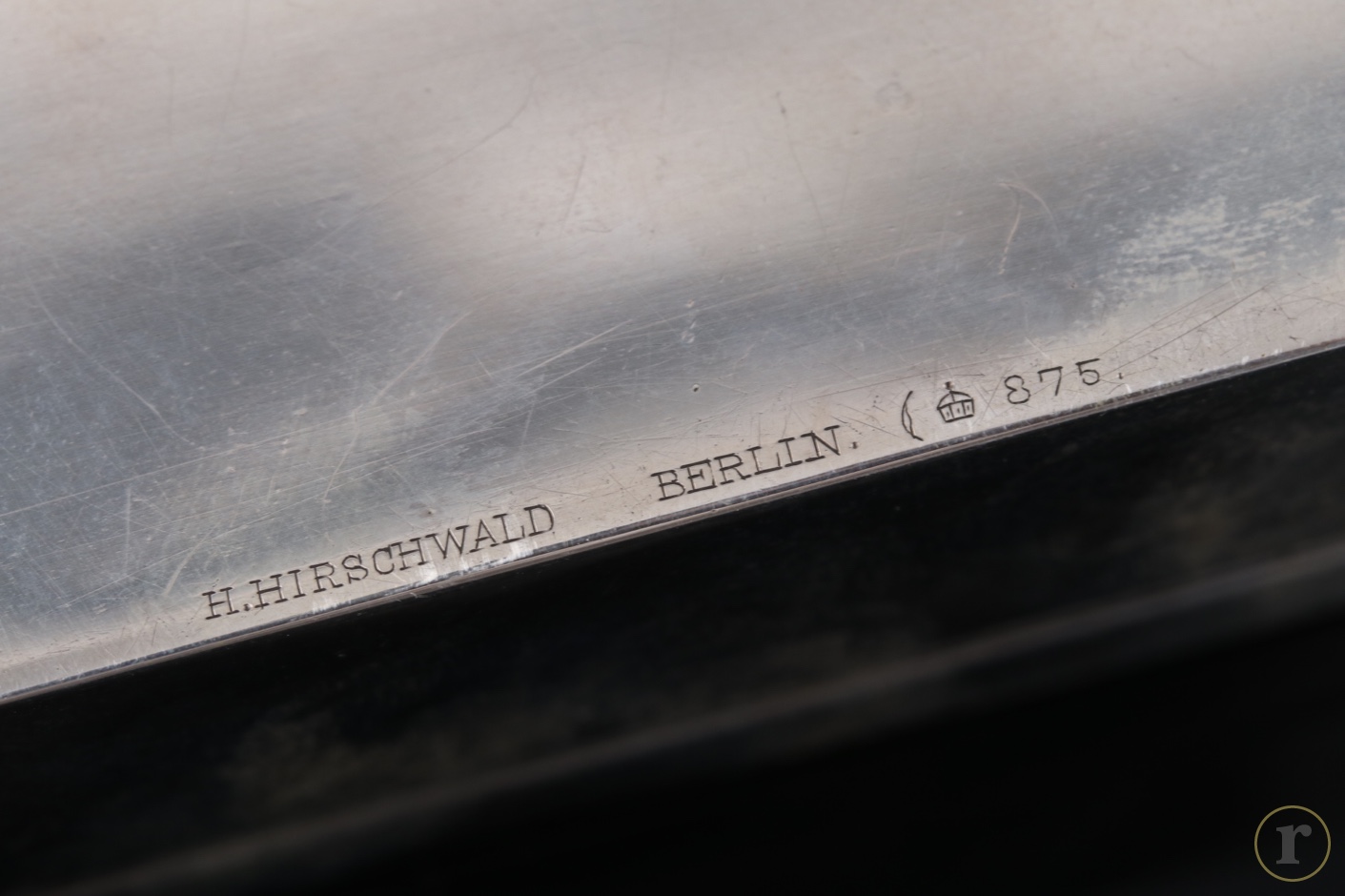 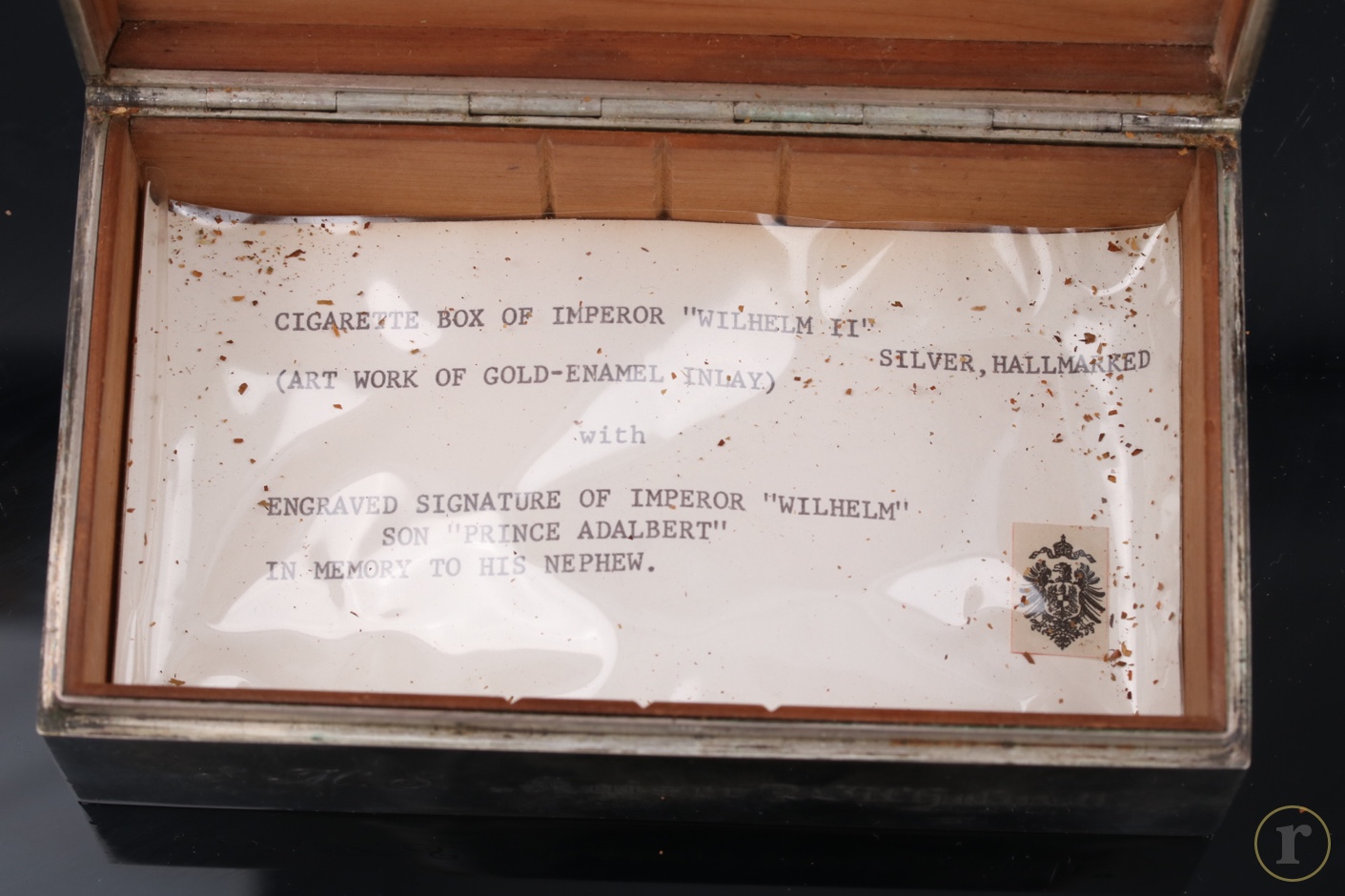 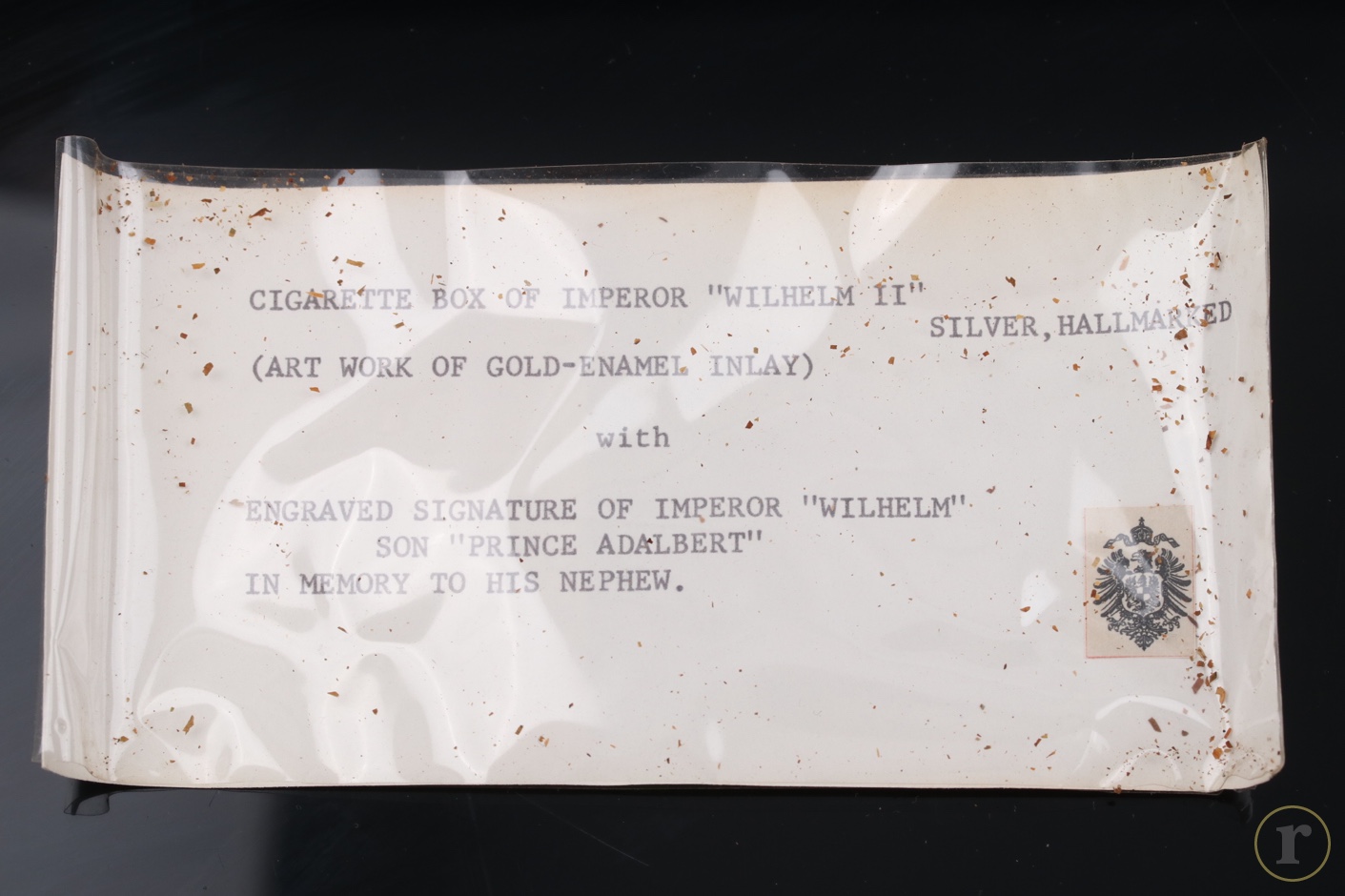 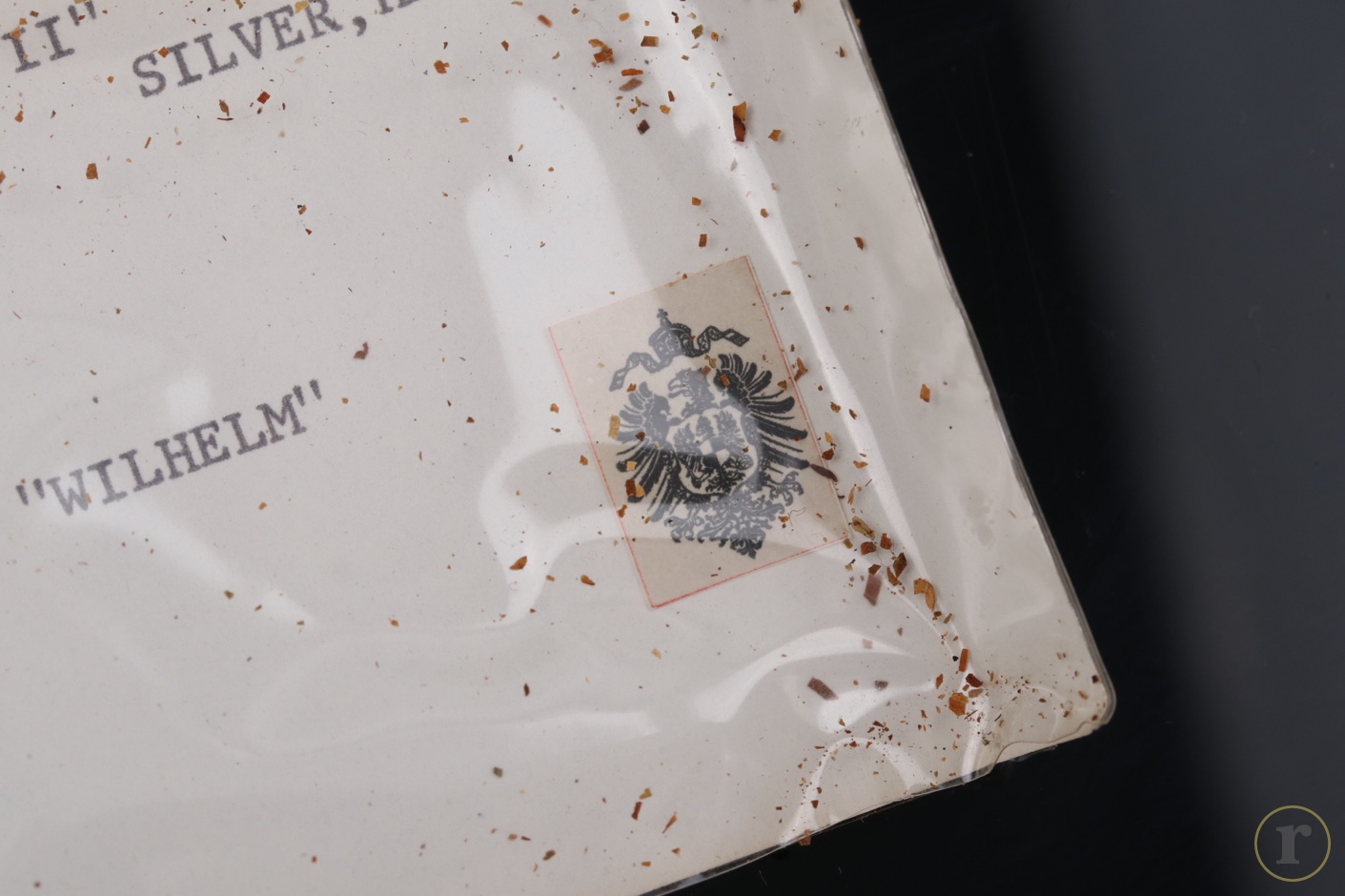 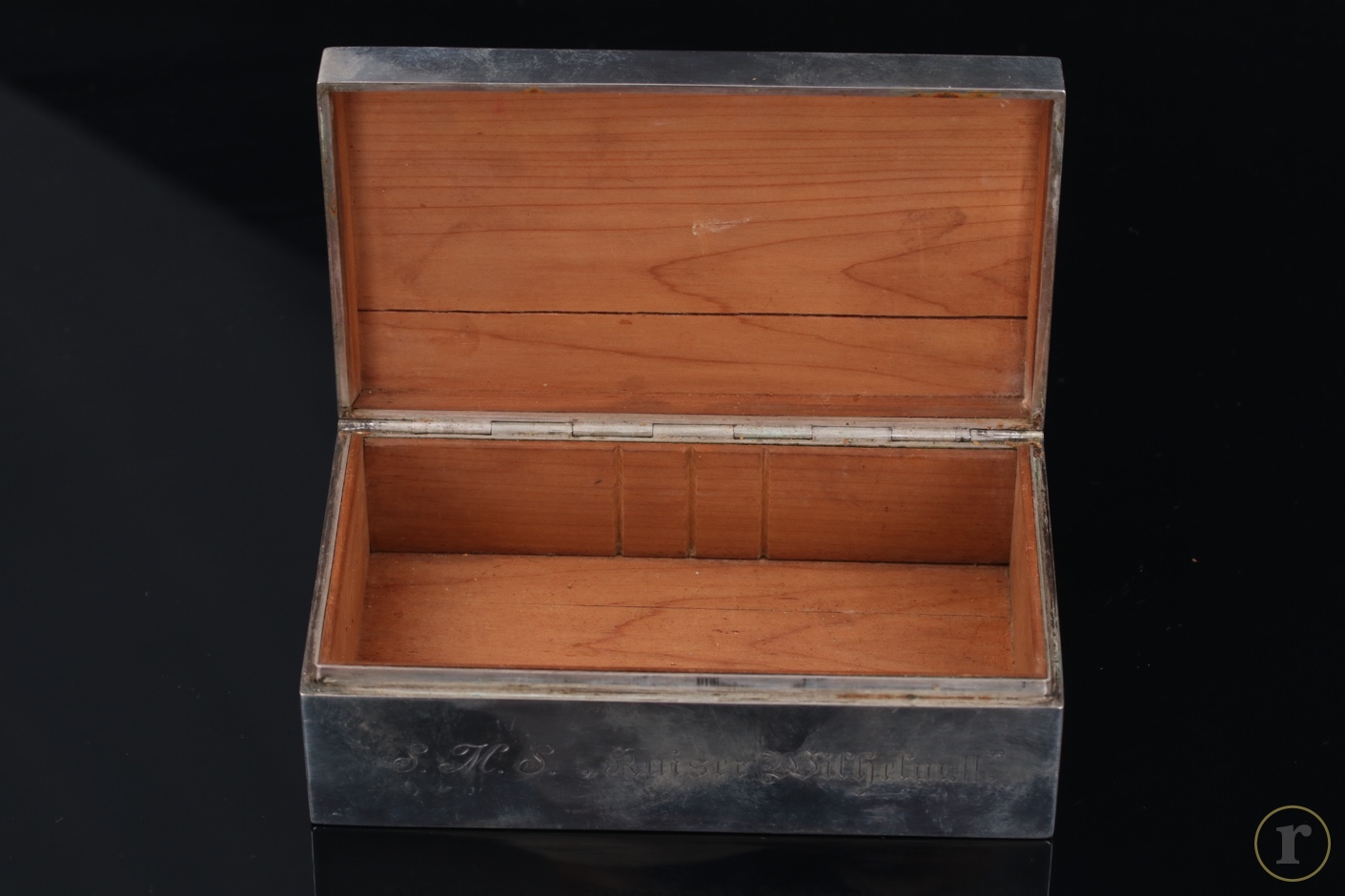 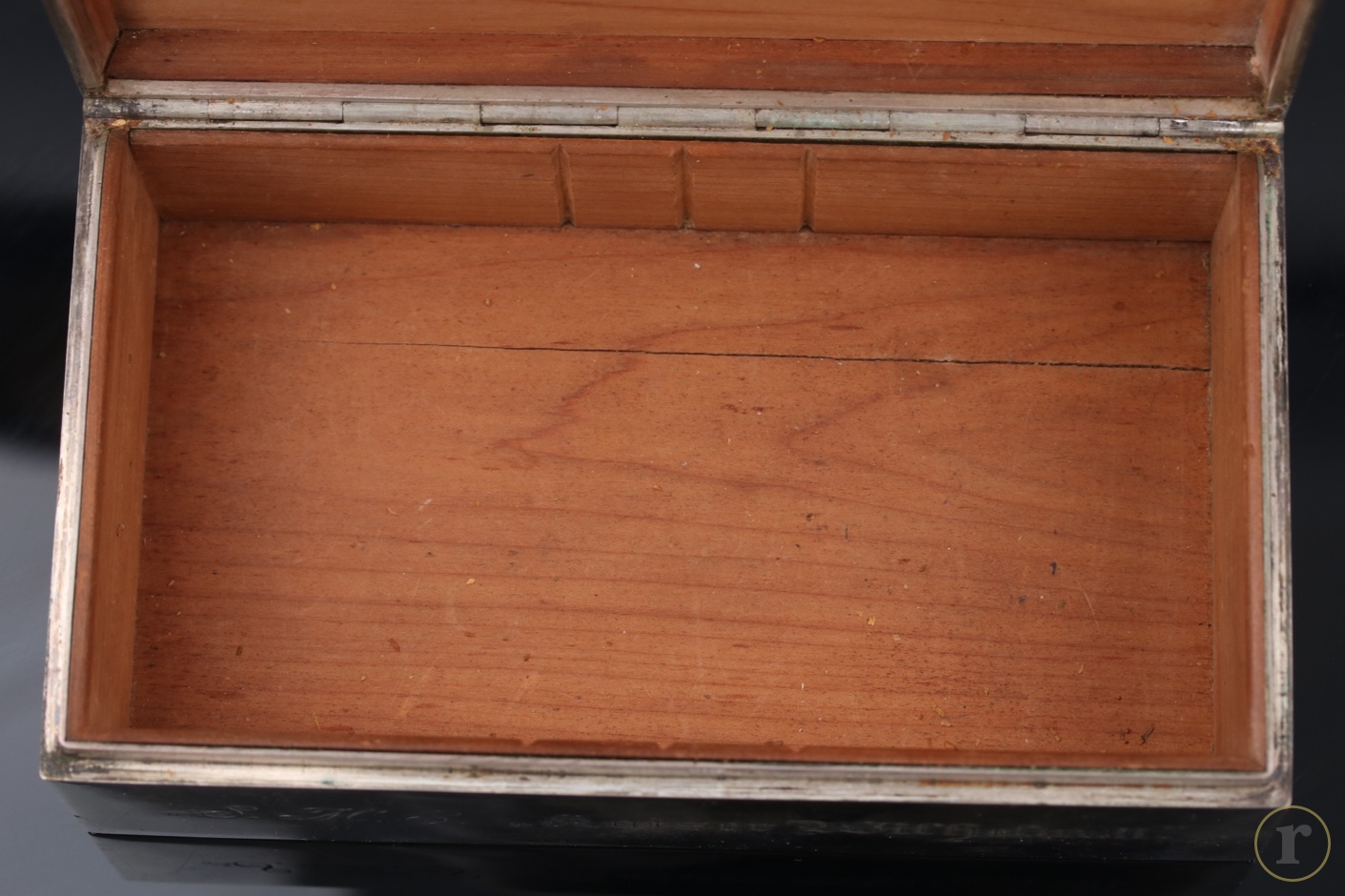 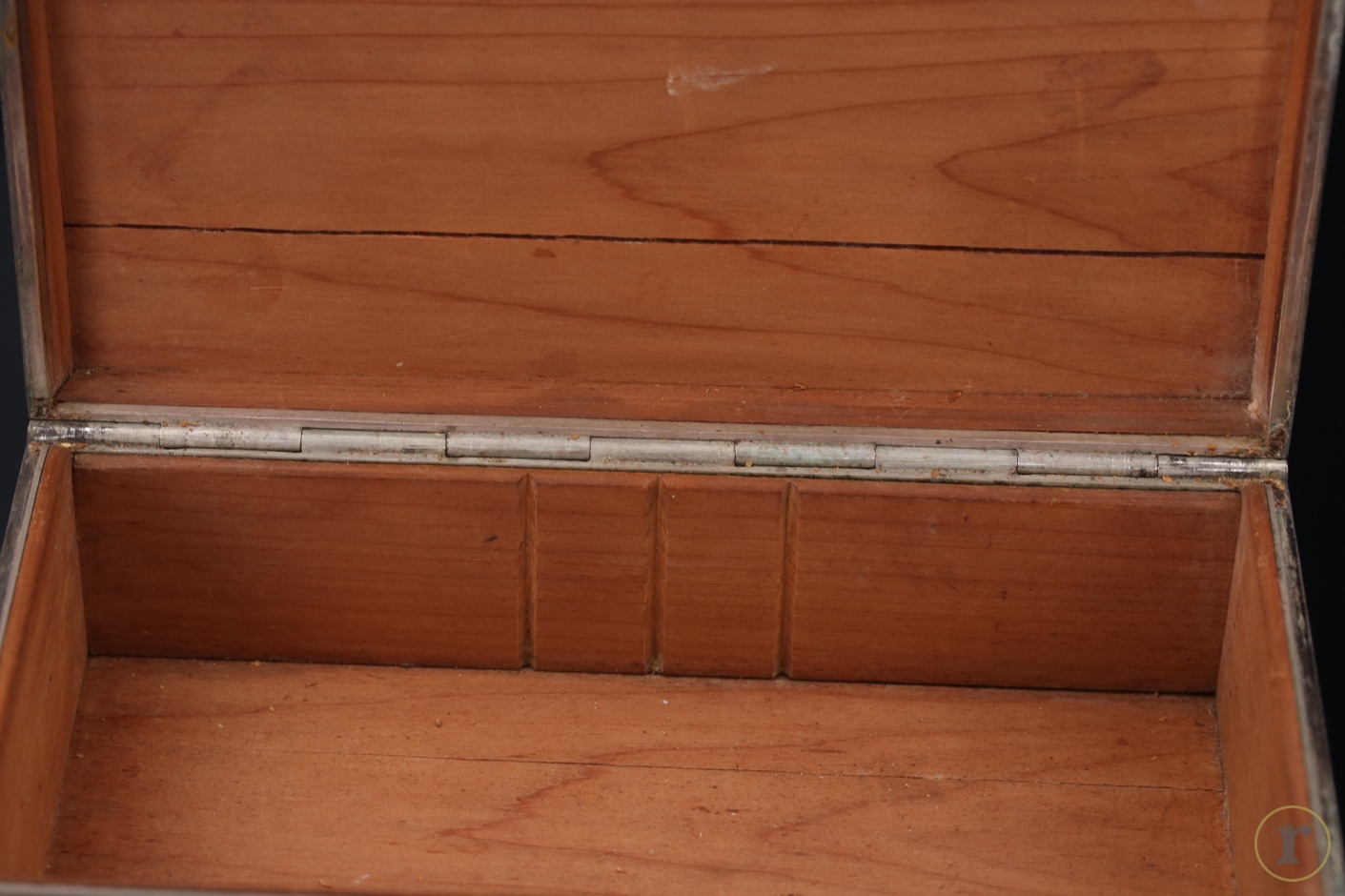 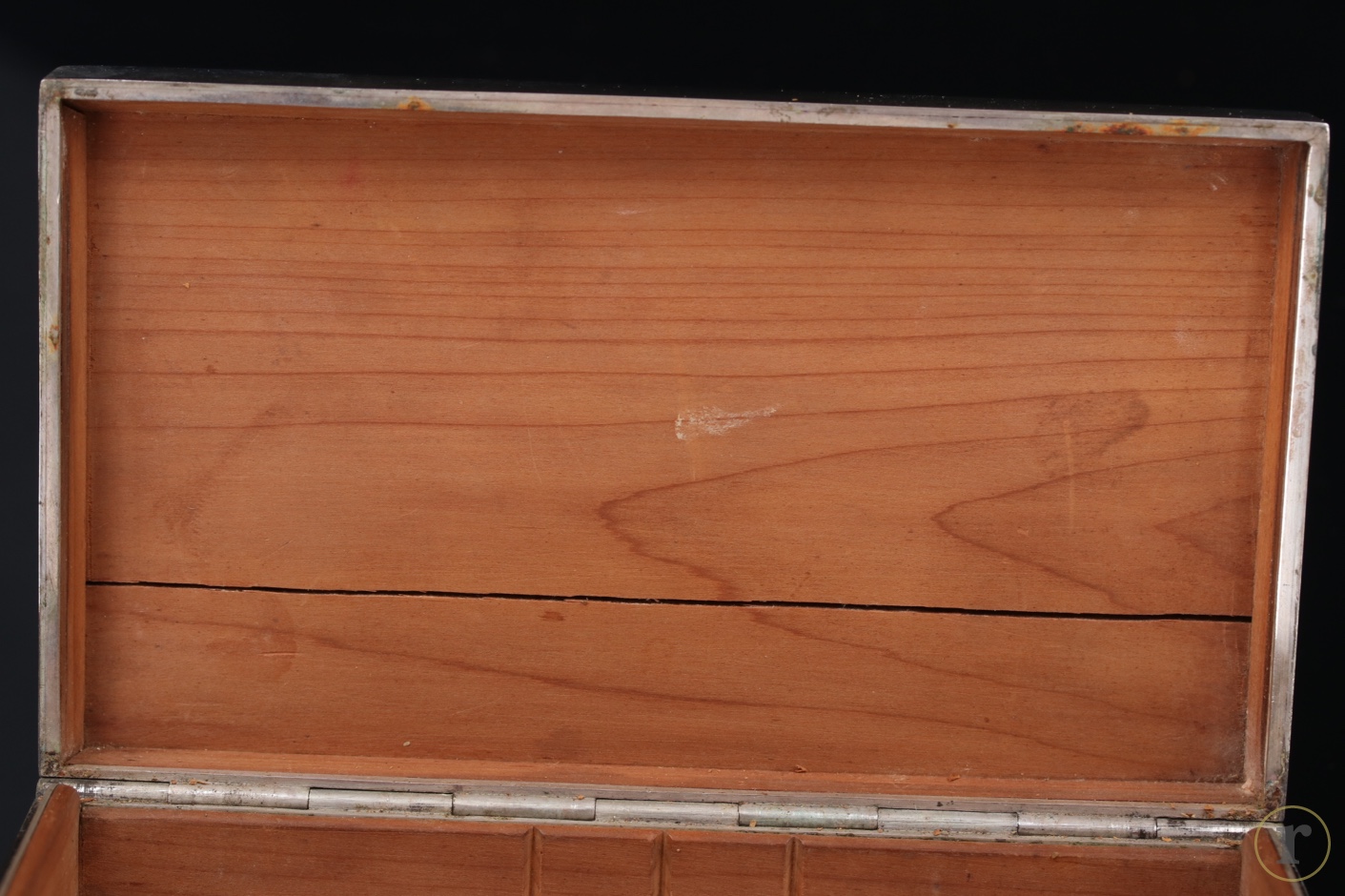