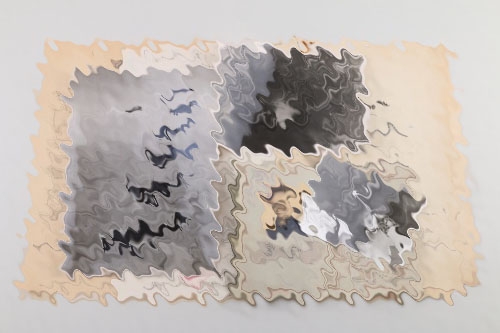 Important document grouping to Major Walter Stimpel, recipient of the 1939 Knight's Cross of the Iron Cross, and Chef-liaison to Heinrich Himmler! Awarded the Knight's Cross on 7.6.1942 serving with 6./Stuka-Geschwader 77 as a young Oberleutnant.
Wehrpaß issued on 16.2.1938. Original applied photo showing Stimpel in the age of 19 years. In April 1936 he joined the Lufwaffe. After basic and pilots training, he served with II./Stuka-Geschw.165 from 1.7.38 - 14.5.39. This unit was renamed into  II./Stuka-Geschw.77 in May 1939. The list of units carries on until 31.3.1945 "Luftwaffe Führungsstab 1a".
A long list of all campaign from 20.9.1938 until 31.3.1945.
Stimpel flew Ju-87 dive-bombers and served during the Poland Campaign in September 39. His unit was transferred to the west, preparing for the May 1940 campaign against Belgium, France and England. On 10.5.1940 he supported the famous Airborne raid against the belgian fortress Eben-Emael.
In June 41 the unit took part in the campaign against Russia (a.o. Charkow, Sebastopol, Kertsch, Crimea). After appr. 400 operational sorties he was  transferred to the Berlin-Gatow Airforce War Academy in November 1942 to be trained as General Staff Officer.
From July 1943 until November 1944 he served with Lw.Kdo.Südost. From Nov 1944 - March 1945 he served as "1a" with the Lw.Führungsstab. In this function he was the Chef-liaison to Heinrich Himmler!
A long list of his awards on pages 21,23, 25-27:
National Sports Badge in Bronze, SA-Sports Badge in Bronze, Luftwaffe Pilot's Badge, Iron Cross 2nd Class, Iron Cross 1st Class, Sudetenland Medal, Squadron Clasp for Kampfflieger in Silver and Gold, German Cross in Gold, Wound Badge in Black, East Medal, Krim Shield, Rumanian Medal “Crusade against Communism”, with silvered Bar “Bessarabien”, Italian War Merit Cross with Swords, Croatian Pilots Badge, Croatian Pilots Badge in Silver, Knights Cross of the Iron Cross.
A great Wehrpaß in good condition 2.
Rare “Vorschlagliste” issued on 31.8.41. Proposal for the award of Knights Cross of the Iron Cross to Stimpel. Four page explanation why he should be awarded the Knight's Cross to the reverse. Motivated because he is a daring Stuka pilot who managed to destroy a Russian armoured train, fiercely defended by 6-8 heavy Flak batteries, on 14.8.41. On 25.8.41 his unit attacked a Russian Navy vessel (“Monitor”) twice unsuccessfully due to heavy Flak fire, but Stimpel managed at last to destroy the ship with his last bomb, diving to an altitude of only 300 meters.
Signed twice by the commander of II./Stuka-Geschw.77, Hauptmann Alfons Orthofer (Knight's Cross on 23.11.41) and the commander of Stuka-Geschw.77, Oberstleutnant Clemens Graf von Schönborn Wiesentheid (Knight's Cross on 21.7.40).
Request for the award of the Squadron Clasp for Kampfflieger in Gold. 9.8.41 dated. 110 missions. Signed by Orthofer.
Request for the award of the Squadron Clasp for Kampfflieger in Gold with hanger. 18.9.42 dated. 414 missions.
Proficiency and conduct statement. 22.11.43. Very positive judgement. Stimpel will become a very good General Staff Officer. Signed by the commander of Lw.Kdo.Südost General Staff, Gen.Maj. Sigismund Freiherr von Falkenstein (German Cross in Gold: 12.7.43).
Telegram. 22.12.43. Confirming his appointment as Airforce General Staff Officer.
21.3.1944 dated "Kriegs-Beurteilung" document listing all his awards including the Knight's Cross. Positive judgement for Stimpel as a Staffelkapitän. A lot of additional information on his military career.
Furthermore approximately 11 other documents regarding his military career and three photos (one postwar).
Stimpel has survived the war. He became one of the highest judge of postwar Germany. Stimpel was vice-president of the Bundesgerichtshof from 1978 until 1985. He died in 2008.
Researchable and most interesting grouingp to a highly decorated daring Stuka pilot. Very rare.