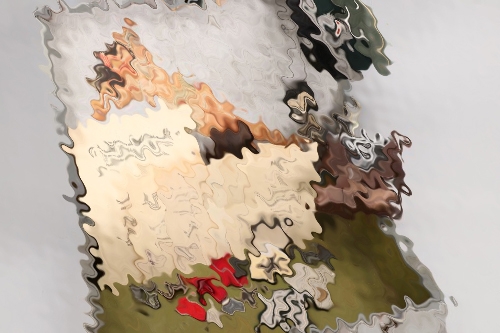 
Military grouping to Oberleutnant d.R. Georg Emmling consisting of his medals and insignia as well as other personal period time belongings such as his personal camera. All medals and documents are complete!

Georg Emmerling has served with 5. and 6. Kompanie of Infanterie-Regiment 199 "List", later Grenadier-Reigment 199 "List". Emmerling was a member of the SA in the rank of a SA-Sturmbannführer serving at Gau level of Gau Franken. Please see next lot for his political grouping.

Certificate Close Combat Clasp in bronze. Issued on 18.10.1943 to Oberleutnant Emmerling serving with 5./Gren.Rgt.199 "List". Signed by the regiment leader, a Hauptmann (!). Folded once.

Certificate to the 1939 Iron Cross 2nd Class. Signed by Generalmajor Döstler, commander of 57.Infanterie-Division. 4.11.1941. Folded once.

Certificate to the Infantry Assault Badge in silver. Issued on 3.12.1941. Issued to Leutnant Emmerling serving with 6./Gren.Rgt.199 "List". Signed by the regimental commander, an Oberst. Folded twice. A nice and unusual print you don't see very often. The certificate and the actual badge was shipped with a 2.4.42 letter which is still part of the grouping.

Certificate to the Wound Badge in black. Issued on 7.11.1941 to Leutnant Emmerling. Signed by Major Dr. Grünwald, commander of II./Inf.Rgt.199. Folded once.

Certificate to the East Medal. Signed by the commander of Gren.Ers.Rgt.387. Issued to Oberleutnant Emmerling serving with Gren.Ers.Btl.199 "List". Not folded.

Certificate to the Austria MEdal. Folded once. 1938 issued.

There is another 1939 Iron Cross 1st Class which is well worn. A nice unmarked piece with brass core showing great patina. Good condition 2.

WWII period time camera with leather case. A Russian made example he had probably taken from a soldier. Marked to the camera and the leather case. Including the carrying strap. The sight is still clear, however, we can not say if it is still working.

Pocket watch. Maker marked and numbered. It was kept in an old leather bag. Not working.

A stunning grouping which was never available on the market before. It was kept in a wooden case (52cm x 35cm) he probably got during his time as a Prisoner of War. It still comes with the original key.