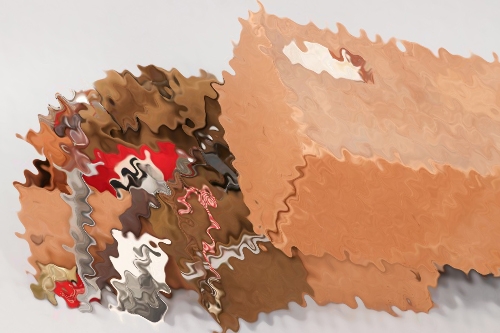 
Political uniform grouping of later Oberleutnant of Gren.Rgt.199 "List" Georg Emmerling. Emmerling has served as an SA-Sturmbannführer with Standarte 13 Birnbach (Gruppe Bayerische Ostmark) before he served at the Gau level or Gau Franken. During WWII, Emmerling served as a Oberleutnant awarded the 1939 Iron Cross 1st Class and the Close Combat Clasp in bronze for at least 15 days of close combat. Please see the previous lot for his military grouping.

His grouping was never available on the market before!

Originally attached red color shoulder for a SA-Sturmbannführer or SA-Obersturmbannführer. Two machine-attached silver tress cords to both sleeve indicating that Emmerling has joined the SA in the year 1929. He kept some period time papers inside the cuff.

Two badges were ripped off the tunic which damaged it. You can see that the rips were closed with a few stitches. It was most probably repaired by Emmerling after the war.

A small piece of the left sleeve was period time professionally repaired. There are no moth holes. The tunic comes in medium size and in good condition 2. Never cleaned. Still dusty.

Please note that this tunic is shown on an original portrait photo which is part of this grouping!

Early SA Service Dagger made by HALSCH & AMBRONN, STEINBACH. A rare marker to find when it comes to SA Service Daggers. The dagger is "Sa" (SA-Gruppe Sachsen) unit marked. The wooden handle comes with an originally attached eagle and SA emblem. The blade is still cleaned and shows the etched motto "Alles für Deutschland". It is marker marked to the reverse.

Bronzed scabbard with signs of use. The screws of the fittings were never opened. One screw of the lower fitting is missing, however. There is the leather hanger still attached to the ring. Another part of the hanger is still around the handle.

A brown SA lanyard for a whistle as well as an HJ leader's lanyard for Kameradschaftsführer (probably his son). It goes with an HJ enamel membership badge which is "Ges.Gesch." marked.  Brass whistle for the SA lanyard.

NSDAP enamel membership badge. RZM M1/101 marked. Another one which is RZM M1/163 marked. Both are not chipped to the enamel.

Brass SA buckle. WW1 medals and badges of his father. Early NSDAP cardboard tinnie of the SA unit of Thalmässing which must be his home town. The tunic was also tailored by a tailor based at Thalmässing.

Original photo of Georg Emmerling as a SA-Sturmbannführer of SA-Standarte 13 Birnbach (Gruppe Bayerische Ostmark). The photo shows exactly the tunic being offered here. He must have re-badged it when serving at the Gau. It also shows his whistle lanyard by the way. The photo comes in postcard size and with an ink dedication of Georg Emmerling to the reverse which is 7.11.1938 dated.

A very nice grouping which was never in collector's hands!