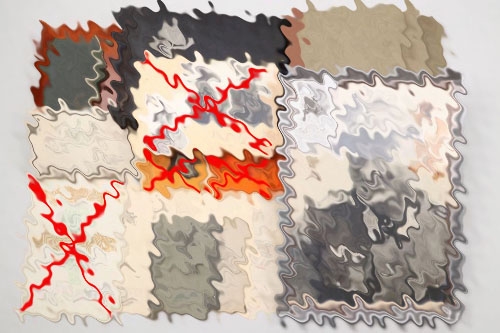 Several original letters of officers sent to Mengeles mothers explaining the death of her son. Documents related to his death. A large quantity of Feldpost letters sent from Mengele to his family. Several original death cards as well as other period time documents related to his family.
Photos:
Two large size photos. One with original frame. Many smaller size photos. Nice portraits of Mengele in his field uniform. Family photos.
Album I with photos of his student time and RAD service time. 1914-1930.
Album II 1940-1941 full Wehrmacht photos taken during the France Campaign.
Album III 1941-1945. Most photo taken in the East.
Photo album of his RAD time, photo album with photos taken in the east, albums of family members. All period time. Including late war March 1945 taken photos.
Note: We can only show a few pictures of what there is. There are probably around 500 photos. The pictures below only give an example of what there is. Looking for the albums will definitely bring out some nice surprises!
Wehrpaß & Soldbuch:

Soldbuch complete with all 24 pages but with the cover missing. No awards noted. Wehrpaß with original attached photograph. All awards noted, a long list of his campaigns.
Feldpost letters:
There are probably around 300 Feldpost letters. All war time and from 1940-1943. Most without envelopes. Sent to his mother and family who collected them. An excellent source of research for this grouping!