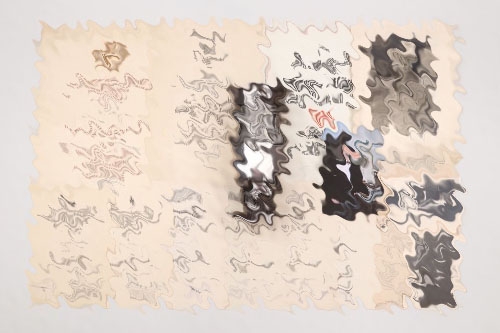 Leutnant Georg Vögerl (1920-2010) served as a highly decorated Air Gunner and Pilot involved in the battle of Malta before he was moved to Fallschirmjäger-Regiment 26 in 1945 due to the lack of aircrafts. He was awarded the Knight’s Cross on 28.3.1945 for bravery during the battle of Stettin.
As a Air Gunner, he was awarded the German Cross in gold on 17.10.1943 and the Luftwaffe Honor Goblet on 18.9.1942 serving with Kampfgruppe 606 which was later converted to I./K.G.77. His pilot was later Knight's Cross winner Oberfeldwebel Josef Grewe.
Vögerl served in the aircraft which dropped a bomb over the "Rotunda Santa Marija Assunta" church at Mosta on 9.4.1942 during the Malta Campaign. Luckily, it has not detonated which i known as the "Malta miracle". He met up with British veterans in 2004 on Malta which is shown on a video part of this offer. Vögerl was filmed speaking about this memories on this campaign.
Please see other items to Vögerl at auction.
Luftwaffe Honor Goblet
Alpaka Luftwaffe Honor Goblet in very nice condition. Nice dark patina. JOH.WAGNER & BERLIN maker marked. FEINSILBER ALPAKA AUFLAGE marked.
Engraved: "UNTEROFFIZIER GEORG VÖGERL 18.9.42"
Height: 21cm. Good condition 2.

Award certificates:
Certificate to the Squadron Clasps for Kampfflieger in bronze, silver and gold. All in very nice condition. Never folded. Issued in 1941 and 1942 and signed by the chiefs of his unit: Kampfgruppe 606. Certifciate to the 1939 Iron Cross 2nd Class and 1939 Iron Cross 1st Class. Both again in excellent condition. Not fodled. Both with an ink signature of Generalfeldmarschall Sperrle. Luftwaffenkommando 3 stamped. Issued as a Gefreiter and Obergefreiter! Certificate to the Air Gunner Badge. Awarded on 18.9.1941. Excellent condition. Certificate to the German Cross in gold. Issued on 17.10.1943 to Vögerl as a Feldwebel. Facsimile signature of Göring. Luftwaffe type. Full size. Folded twice. One ink sain. Slightly sun bleached since it must have been framed once.

Certificate to the Luftwaffe Honor Goblet (Ehrenpokal) awarded to Unteroffizier Vögerl on 18.9.1942. Facsmile signature of Göring. Not folded. A small bit missing to the bottom.

The Knight's Cross document is missing. It is possible that is was never handed to him.

Other documents:
A very nice handwritten certificate to congratulate Vögerl to his 100th mission. Kampfgruppe 606 issued and signed by his Staffekapitän. 1.5.1942 dated. Not folded. Signs of age.

There are several other period time documents providing additional information on his service time. Including his POW documents.

There are two really intereting April 1945 dated documents telling you about his injuiries on 3.3., 4.3. and 5.3.1945. The documents were issued by an „Abteilungsarzt“ and sent to „Armee Oberkommando der Fallschirmjäger Berlin-Tempelhof“. Vögerl was given holiday from 8 days holiday on 5.4.1945.

Photos:
Most photos are postwar. There is a nice portrait with passepartout showing Vögerl as an Unteroffizier in tropical uniform wearing his EK1 and squadron clasp. It was taken at „CATANIA 1942“.There are two more photos which are UV light negative and could be period time. They show Vögerl next to his aircraft.

A video tape "OERATION PEDESTAL" out of Vögerl's possession. The reverse of the cover shows veterans. Vögel is being interview on this tape.