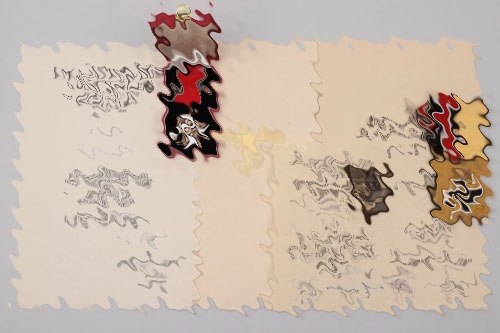 Exceedingly rare Eagle Order grouping to a Rumanian Hauptmann serving with rum. VI. A.K. (Wehrmacht) during WWII.
The grouping includes an Iron Cross 2nd Class award certificate signed by Generalleutnant Wilhelm Burgdorf, who was later promoted and became Chief of the Army Personnel Office (Heerespersonalamt) and Chief Adjutant to Hitler.
The grouping to Hauptmann Leon Ionescu includes the German Order of the Eagle 3rd Class w/Swords and case, the Iron Cross 2nd Class with rare LDO case, the Crimea Shield (Krimschild) on Rumanian (!) cloth backing, and all of the award documents.
The Eagle Order is marked “900” and “21” on the medal ring indicating manufacture by Gebr. Godet & Co. in Berlin. The Eagle Order case has the gold national eagle on the top with award title inscribed on the silk lining within. The Iron Cross is marked “65” on the ring indicting manufacture by Klein & Quenzer in Idar Oberstein.
The award documents, Eagle Order presentation folder and Eagle order award regulation are all in unfolded mint to near-mint condition except for the Krimschild award document which has one fold. The Krimschild document is in an unusual bilingual format (in German and Rumanian) and is pictured in Detlev Niemann’s “Price Guide to Orders and Decorations of Germany”, 2008 Edition, page 653.
The medals and cases are all in mint to near-mint condition. A one-of-a-kind unique set of awards and documents!
Burgdorf was also the German officer who handed Field Marshall Rommel poison in October 1944 with the message to either swallow it and die a hero, or be executed for treason. Burgdorf committed suicide in Hitler’s Berlin bunker on 2 may 1945, one day after Hitler.