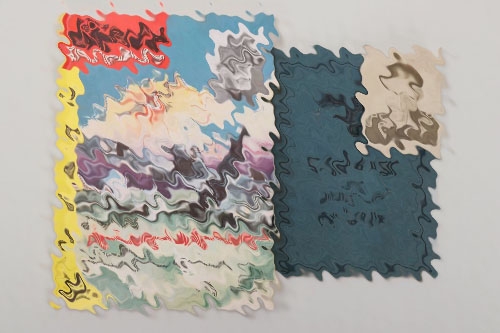 Description
According to consignor's wish, this item is not available for buying after the auction. Please bid at auction to purchase this item.
-
Important Soldbuch to Me109 and Me262 fighter pilot and Knight's Cross with Oak Leaf recipient Oberleutnant Walter Schuck. Schuck was a Luftwaffe Jagdflieger ace with 206 victories.
Schuck is known to have been serving as a Me262 from February 1945. He was shot down on 10.4.1945 but survived. He served with 7./J.G.5 at the so-called "Eismeerfront". From February 1945, he served as commander of 3./J.G.7.
Personal Soldbuch issued on 16.8.1944 by III./Jagdgeschwader 5. A second issue "Ersatzausfertigung" since his orginial Soldbuch was lost. Original photograph missing.
Unit information: 10./Jagdgeschwader 5 and 3./Jagdgeschwader 7.
Several important signatures inside.
Awards on page 22:
Pilot's Badge
Iron Cross 2nd Class
Squadron Clasp for Jäger in bronze
Sudetenland Medal
Honor Goblet
Iron Cross 1st Class
Squadron Clasp for Jäger in silver
Squadron Clasp for Jäger in gold
Wound Badge in black
German Cross in gold
Knight's Cross
Stamped by III./J.G.5 and signed by his Gruppenkommandeur and fighter pilot ace Hauptmann Franz Dörr.
The awards above were noted once the Soldbuch was issued in August 1944.
Two more awards noted:
Knight's Cross with Oak Leaf on 30.9.44. No stamp. Signed by fighter pilot ace Major Heinrich Ehrler.
Squadron Clasp for Jäger in gold with hanger "300". 13.1.45. No stamp. Original signature of fighter pilot ace Oberleutnant Rudolf Glöckner.
Original small size photograph of Schuck as well as a postwar "Landser" magazine on him and additional information on his award documents as well as his career.
Extremely rare!