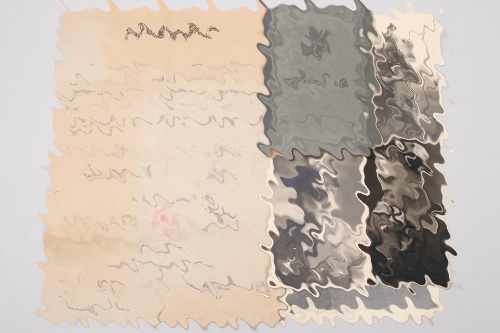 Grouping to Oberfeldwebel Hans Grohmann serving with 2. Nachtjagdgeschwader 1 and Zerstöregeschwader 76 as an aircraft engine mechanic.

Wehrpass issued on 5.4.1937 with the original photo. His units are listed on page 12. Oberfeldwebel Grohmann completed various educations in aircraft technology. For example, he was trained on the Daimler Benz DB 603 engine. This engine was used for various German aircraft, such as Dornier Do 217, Dornier Do 335, Heinkel He 219, Messerschmitt Me 309, Focke-Wulf Ta 152, Messerschmitt Me 410 and Fiat G.56. Listed on page 21.

Campaign list from 11.10.1938 until 4.5.1945. Mainly deployed on the Western Front (France, Norway, Denmark, Holland, Belgium, and Germany "Reichsverteidigung"). Some pages are loose. The cover is separated from the book and two holes to the cover.

Including three nice portrait photos and a postcard as well as his recruitment certificate. Period time.