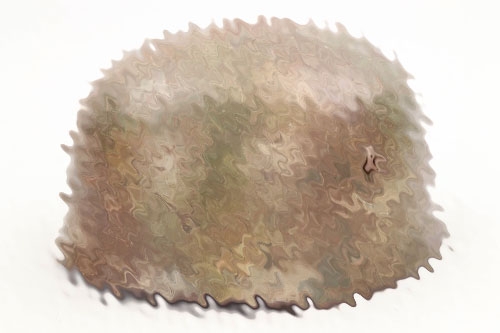 Für diesen Artikel ist leider keine deutsche Beschreibung verfügbar. Klicken Sie hier, um die Beschreibung übersetzen zu lassen.
A very rare M38 paratrooper helmet issued with both decals. An early example which was probably worn during the Crete Campaign. Originally issued with apple-green color and two decals, the helmet received a 3-color camo paint. Period time! You still have apple green color however most is covered with the red-khaki-green sprayed camo paint. The national decal is about 50%. The eagle has nearly entirely disappeared but there is still a clear shadow.
The shell comes with most of its original paint inside and all rivets original attached.
The lining is missing.
ET71 stamped.
A rare helmet with a lot of character!