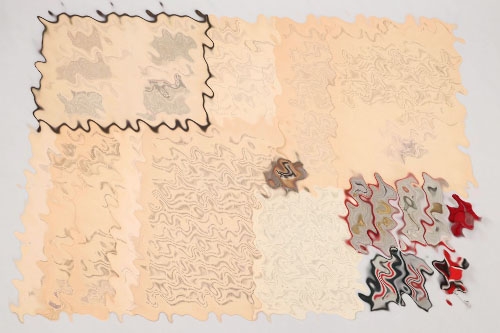 Grouping to Major Joachim Tiesler serving with 6./Artillerie Regiment 3 (mot). He was a Stalingrad combatant who was awarded the German Cross in gold on 28.01.1943 for his bravery in the battles of Stalingrad. In the early morning 16 enemy tanks attacked the outnumbered unit of Major Tiesler. Only 28 men "Kanoniere" defended the position and immediately started a counter-attack. Shortly thereafter he defended again an attack of a group consisting of 50 soldiers and 4 guns, just with 10 men. He was wounded 6 times in total. Major Tiesler was at the age of 23, one of the youngest Major's of the Wehrmacht he was killed in action on 21.7.1944 at Zamosc (Poland).

German Cross in Gold made by Juncker. Fives rivets to the reverse. Chipped to the enamel swastika. Period time re-attached pin. Unmarked, however a clearly Juncker Berlin manufactured piece. A worn badge.

Four documents to his parents about his dead and three posthumous promotions. All 1944 dated.

An interesting board with five period time newspaper cuttings of his "Heldentod" ("Hero's Dead") as well as a report "Deutsches Kreuz in Gold" about his brave act in Stalingrad. One handwritten letter and two postwar "Bundesarchiv" documents (both 1956 dated).

A very rare and interesting grouping.